Learning to Knit & Other Good Intentions

We have a pretty busy calendar of workshops lined up at Fibre Arts Bootcamp this year, so if you’ve had a burning desire or even a faintly warm desire to commence or expand your fiber skills, then make 2013 YOUR year. 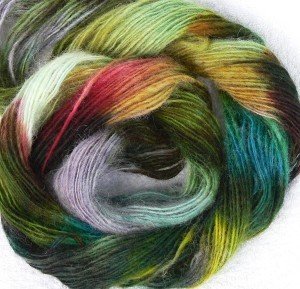 We are all full of good intentions, but as Samuel Johnson famously quoted ‘The road to hell is paved with good intentions.’  Hopefully, one of your resolutions on New Year’s Eve was to follow up on your good intentions and convert them into positive actions.

Knitting, crochet, felting, spinning, weaving and the countless other avenues in the grand field of fiber work is immensely satisfying on a personal level and can be very rewarding on a physical level.  Have you ever worn a pair of hand-knitted socks or mittens, made from pure wool that you have prepared and spun yourself?  If your answer was ‘no,’ then you have missed out on an exquisite pleasure.  This pleasure can be amplified a hundred-fold, when you can give something that you have made, to someone for whom you care.  Earning an income from selling things that you love to make is a 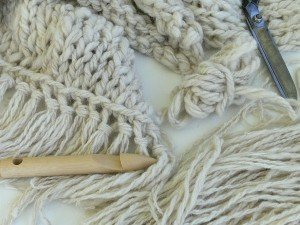 tough road to travel, but it is the ultimate, altruistic business, since work and pleasure meld into one.

Incredible as it might seem, it has taken only three generations for the so-called developed nations to forget what was, at one time, taken for granted: the ability to fend for ourselves!  It was during the post-war years and especially during the 1950’s, when mass production really took off and was promoted using the brand new medium of television.  Within sixty years, the skills of feeding and clothing ourselves, previously an essential element of most households, has been mostly forgotten.  That is deeply disturbing!  The native cultures of North America and elsewhere have also been lured or dragged away from their natural instinctive survival skills.  Today’s predominant survival skill has been reduced to counting money and determining whether we can afford to buy food.  Life cannot become more absurd! 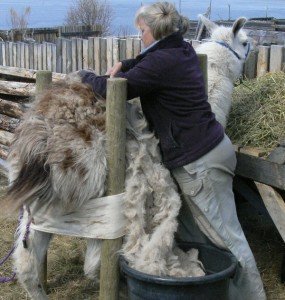 When you follow the process of gathering the fibre from an animal, cleaning the fibre, preparing it by combing or carding, spinning the fiber into yarn and turning the yarn into a garment that protects you from the elements, then you develop a real connection, not only with nature, but with the connectivity between all life on the planet; something that you cannot possibly feel by simply exchanging money for factory-made articles, imported from some distant land.  Rediscovering the essence of what it takes to survive on this planet is essential for each and every one us, if we are to survive the coming decades.  If we do not let go of mass-production and cheap sweatshop commercialism and embrace local production and craftwork, then when the oil runs out, we really are going to have a hard time and the terms of the survival game are going to be defined for us.

Of course, we’re all different.  We each express our uniqueness through our desires, our 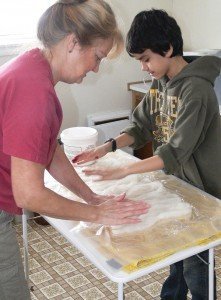 gifts and our sources of inspiration; not everyone will have the same leaning toward the fibre arts.  However, if you have not yet identified what it is that you can or want to contribute to society, however large or small, then I would suggest that fibre work is a good place to start. You can do it all year round and it is especially rewarding during the winter months, when outdoor work is often restricted.  Neither should the fibre arts be seen as a ‘woman’s pastime.’  Firstly, it is not just something to pass the time!  Secondly, in many of the oldest societies in existence, men and women play an equal role in the production of yarn and fabric.  Young or old, male or female, it matters not; only the beastly ego is suffused with the prejudice that makes spinning or knitting appear to be a ‘girlie’ thing.

But guess what?  Learning how to knit a pair of socks is not difficult; if you make a mistake, which we ALL do, you can undo it in a jiffy and do it again.  Shepherds used to have a lot of time on their hands and spent it knitting or working with fibre …. whilst watching their flocks  ….by night …..while seated on the ground …eh???

Make a decision!  Commit yourself to developing a meaningful skill in 2013.  You have nothing to lose and everything to gain by so doing and you will be playing a small, but essential part in re-establishing the road, not only to surviving, but restoring once again, a thriving culture that future generations will look back on with pride.

Don’t forget to grab your free copy of the Beautiful Llamas in the Raw wall calendar!