I don’t know what it is about me that makes me steer away from conventionality and directs me into the realm of experimentation and discovery, but even with crochet, I find it so difficult to stick to the rules. Maybe, when I’ve reached my 100th birthday, I’ll sit back in my rocking chair and actually follow a pattern to make a shawl …..but I don’t think so!

Freeform crochet opened up an entirely new world of creativity for me and rekindled my childhood interest in crochet, which died along with the plants on the windowsill that I forgot to water, whilst I was busy cutting up my mother’s clothes.  Did I really do that?  I’m afraid I did.  I would take something that looked interesting and cut it up and sew it back together again into a style I liked.  I didn’t have any patterns or even any real knowledge of what I was doing; that’s just the way my mind worked, because my mother used to make her own clothes; she would throw some fabric on the floor and start cutting.  So, it is little wonder that my knitting and crochet followed the same abstract path as my sewing skills. 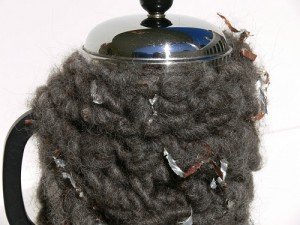 I feel a strange irony when I think back and remember how, at school, I hated ‘needlework’ with a passion! What nonsense they tried to stuff into my head!  Why did the teachers determine to show us such archaic, boring, long-winded methods of making things?  It was second nature to me to look for another way of doing things; a faster way of doing things and sometimes I would stumble across a much better way of doing things.  Twenty years later I was a clothing designer.

Now, another twenty years has passed and I’m doing the same thing with yarn art that I did with needle and thread.  I have never really considered myself to be an artist and I swear that I couldn’t even draw a stickman in proportion, but we all have artistic talent within us and perhaps my own artist talent does not appreciate the confines of rules and patterns.

Freeform crochet is probably the perfect medium for yarn-bombers, a breed of people who have this strange penchant for clothing handles, park benches, lamp posts and even trees in colourful knitting. Hmmmm…  Freeform crochet lets you hook by the ‘seat of your pants.’  Easily moulding your work as you go, to suit the shape of whatever you are creating.

Over the weekend David and I made another video.  What started out intending to be a short video tutorial to help a friend in England get started in basic crochet, turned out to be a bit of a marathon covering both basic crochet techniques as well as introducing the art of 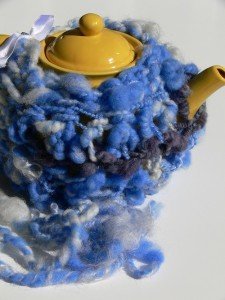 freeform crochet.  I think it works quite well, however strange the combination sounds.  David has broken the video down into two parts, one continuing immediately on from the other, so it is best to watch them in sequence.

Unfortunately, we still don’t have the perfect set-up for recording and you can still hear the occasional vehicle trundling up to Mabel Lake for the Thanksgiving weekend.  However, the llamas are wandering around in the background, the sky is blue and the birds are singing, so I hope you enjoy it.

I have mentioned a few times before, that Fibre Arts Bootcamp is the educational offshoot of Llamas in the Raw Sanctuary, which rescues abandoned, neglected, abused and homeless llamas and alpacas.  All the money from the workshops and sale of Mega Hooks and yarn goes toward the sanctuary and we have a had a big influx of animals over the last few weeks placing a huge demand on our very limited resources.  Your purchases and donations are all very gratefully received and go towards an unusual, but nonetheless worthy cause.  Thank you.