With winter almost upon us once more, and the abbreviated daylight in which to chase weeds, build fences and groom llamas, we can turn our attention once more to those

indoor projects that we’ve been yearning to get on with.  In my case, rug making is my passion, well one of them, which has been placed on hold for a few months, while the great outdoors beckons with it’s allure of sunshine and greenery.  I’m almost bouncing off the wall with anticipation at heading off to the Charity shops and stocking up with bags of recycled linen that can be converted into experimental rugs.

A few months ago, David posted a series of videos on Curious where we introduced Rag Rug Weaving on a Salish Loom.  These videos have now been updated and enhanced and are in the process of being loaded onto our YouTube Channel.  These videos show you everything you need to know to get started on weaving rag rugs. 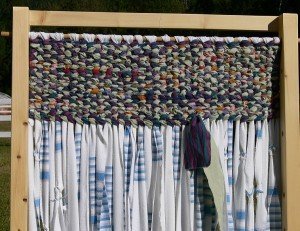 science that would baffle even Einstein.  This may perhaps be the case with a fancy, room-sized loom, sporting all the bells and whistles needed to weave a Persian carpet, but the FAB, Salish-style loom that we are working with in these videos is child’s play, so don’t be put off by the scary ‘L’ word – ‘loom’.

In this first rag rug video series, we explore warping the loom using loops of fabric cut from old t-shirts.  In a later video we will take a closer look at warping with a continuous yarn.

There appear to be two distinct factions amongst Rag Ruggers: the ‘cutters and the ‘rippers.’  Cutting the cloth can be done with scissors, tailors shears or a rotary knife, 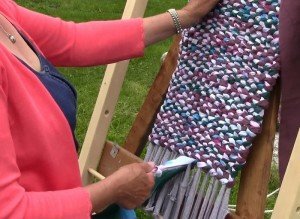 which can be either manual or electric.  Having spent many years working in the field of clothing design, I can tell you that using a blade to cut your fabric strips is not only considerably more time consuming, but is generally much less accurate.

Good quality cloth, when ripped from edge to edge will be exactly the same width from one end to the other since the tear will usually remain between two rows of the weft, breaking only the strands of the warp.  If you cut the strip however, even if you mark it out and cut it very accurately, you will always stray a little bit from the line and when you do so, you will cut the weft and expose more raw edges.  This will result in considerably more edge fraying than you will produce by tearing strips.  Professional curtain makers will almost always tear the fabric to ensure a clean line, perpendicular to the selvedge.

I’ll be back with more videos shortly.

Don’t forget that you can build your own Salish Loom using the downloadable plans available from the FAB Store.