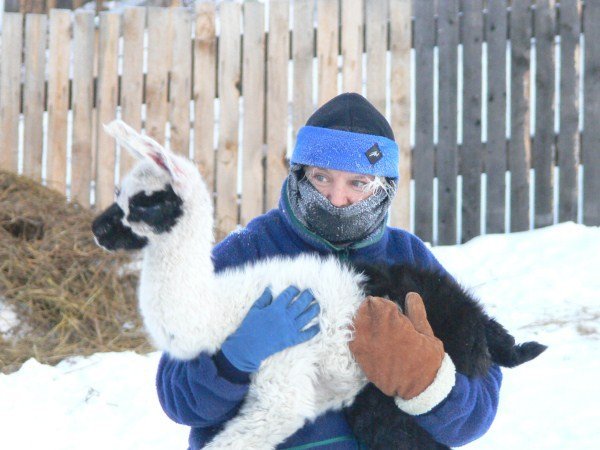 Winter in central BC had been incredibly mild and despite several dumps of snow, nothing had stayed around for long and the grass continued to grow so the Llamas could graze the cut oat field.  Then one Friday in December, winter arrived with vicious winds blowing straight out of the Arctic, making minus 16 degrees C feel more like -27.

Fine powdery snow arrived horizontally, drifting around everything and hampering any attempt at movement.

…….and SoDah chose THIS day to bring into the world her first baby!

Of course, she couldn’t have the baby in the cozy llama house and hay shed.  Llamas prefer to be out in the open for such events. Luckily, the writhing wet mass was spotted within a minute of landing in the snow and was rushed into the haystall and wrapped in blankets and towels.

The spiteful wind found every chink in the woodwork and opening eyes in the blizzard was painful at times. Cardboard and blankets were quickly stapled to the walls and the generator dragged to the haystall to power a hair dryer to assist in fluffing up the coat. 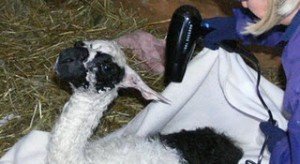 The cold was so savage though, that even the hair dryer couldn’t cope. Our little winter cria was then bundled up and rushed to our work studio to dry in front of the furnace.

After an hour of heavenly warmth and having learned the art of standing up, she had to be returned to the stall with her anxious mother for the all important colostrum feed.

The tempestuous weather continued the following day with the air temperature dropping to -25 C, so mother and cria remained confined and frequently monitored. Unfortunately, SoDah wan’t able to feed her baby on the second day and once more she was hauled indoors for a bottle feed as she appeared weak and was constantly shivering……hardly surprising really!

We are not great advocates of interference, but at this stage tube feeding had to be considered as the baby would not take a bottle. We gave SoDah one more attempt and THANKFULLY she allowed her baby to feed, perhaps due to the anxiety of absence.

Unfortunately, at some time during the proceedings, the cria’s ears succumbed to frostbite and hung limply. This is always a danger with newborns in winter here.

If only she had been born the day before, she could have enjoyed warmth, sunshine and grass. I have read that Llamas choose the best time and weather to give birth…… not this time though!

….and the baby’s name? Pinguino seemed appropriate – evenly marked black and white – our own little penguin!

You would think that was enough for a little cria to cope with …. As if we hadn’t seen it all, Ping was to show us just how stoical llamas are!  To be continued …..