A Beginners Guide to Knitting ~ Casting On Part 1

I am delighted by the strong resurgence of interest that is taking place around the yarn arts, such as knitting and crochet, and more especially amongst the younger generation for whom knitting was something that happened to women when they earned the title of grandma.  Not only is knitting shaking off this granny stigma, but it is finding a great following among men!  Let’s have some men show up at the workshops!

Of course, a century and more ago, it was common for shepherd boys to learn to knit, 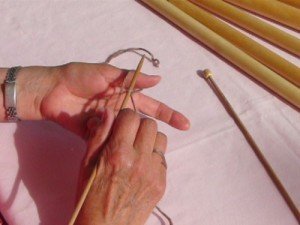 since they would make their own socks whilst watching their flocks ….especially by night and seated on the ground?  So to do our part in assisting this historic rebound in knitting, we’re making a series of videos aimed at beginners.  Just because they are aimed at people learning to knit however, we hope they might also prove to be of some interest to the more experienced knitter.  There are plenty of new tricks to learn and I personally try to slot in a few minutes each day to discover a new tip or technique and sometimes rediscover something I was doing years ago, but had forgotten.  Research shows that if the brain is not constantly being pushed to learn new skills, then it becomes atrophied and its capabilities actually dwindle.  You have been warned!

…..what was I supposed to be doing?

Oh yes, a beginners guide to knitting.  I will start off with a knitting ‘How To’ and add crochet a little later and that is entirely due to my personal bias toward knitting.  Sorry crocheters!

In today’s video I want to show you my own simple long tail method of casting on, using the thumb. Although the thumb cast on has a reputation for creating an untidy or wavy edge, this very simple method will leave you with an edge to be proud of.  I get a little carried away in this first video and knit a couple of rows after the cast on, just so you can see the neat finish.

So, pick up thy needles and let us begin ~