In my last post, I showed the first dry processing stage, using the fibre tumbler to shake the loose sand and grit out of the fleece.  There’s still plenty more grunge to be removed yet, such as half a bale of hay, a complete botanical seed library, a barrow load of twiggy 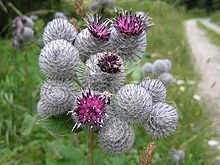 bits and in this neck of the woods, the bane of the camelid keeper: burdock!  Aaahh!

There’s not much that can be done with the burdock affected areas; any fibre that is stuck to the burrs has to be discarded.  For most of the remainder though, the vegetation can be removed by first opening up the clumps of fibre and this is done using a picker.  There are several different designs on the market, but they all operate on the same principle: forcing the fibre through a forest of steel spikes to separate the fibres, allowing the vegetable matter to 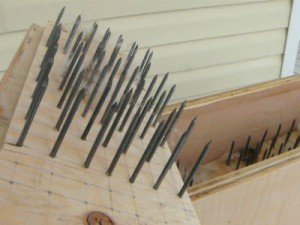 either drop out, be shaken out or be picked out by hand.  There’s no getting around it, cleaning fleece is a painstaking process!

I’ve made quite a few fibre pickers, trying to find a design that will do everything we need it to do.  Unfortunately, it seems that such a thing is not possible, but I’ve now built one that is about as versatile as you can get and that’s what I will show you today.

Picking does not remove all of the vegetation, but it does allow every part of the fibre to be examined and the worst of the detritus taken out; it also shakes out any remaining sand and grit.  The next process of combing or carding will remove the remainder of the unwanted elements and we’ll cover that in the next video. 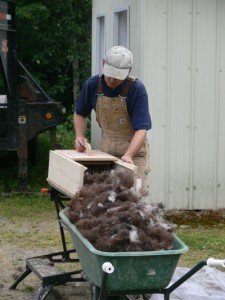 Here’s the jumbo picker.  This device is used to open up the fleece prior to tumbling.  This process is not absolutely essential, but it is more effective and a lot less messy than pulling the fleece apart by hand, which is an incredibly filthy job!

After tumbling, the fleece is mostly free of sand and grit and then goes through the standard picker.

If the fibres are really short, then a picker with smaller spikes that are set closer together, is required.

Trying to put too much fibre through at once will cause the float to jump and skip.  It can also bend the spikes out of shape.  This can also occur with really dense fibre mats.  These mats usually come from the legs or skirt and should be discarded during the sorting process that occurs during or immediately after shearing.

Usually, the fibre is run through the picker three times to completely open it up. 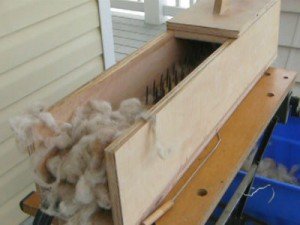 Sometimes it needs more and occasionally less, but you’ll know what’s required when you’ve done it a few times.

I shall be drawing up the plans to the picker, so that you can build your own and will make them available here soon.

Here’s the video (zzzZZZZ Alert – it’s not incredibly exciting stuff, but it is interesting!)