The Ccara llama has two coats,a long coarse protective or ‘Guard’ hair that lays over a soft, downy undercoat.  Typically, we recommend that Ccara llamas are not shorn, since it takes a huge amount of energy from the llama and around two years before the outer guard hair can effectively protect from all elements again.

Many llama keepers are unaware of this and view all llamas to be the same and shear them.  The resulting fibre requires excessive processing to separate the long guard hairs from the wonderfully soft under down. 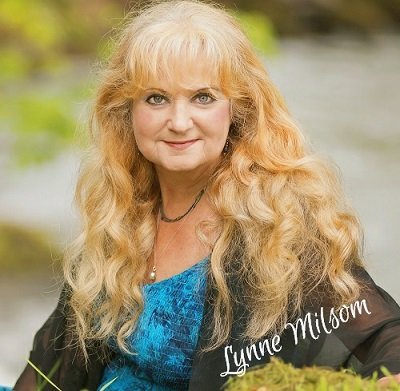 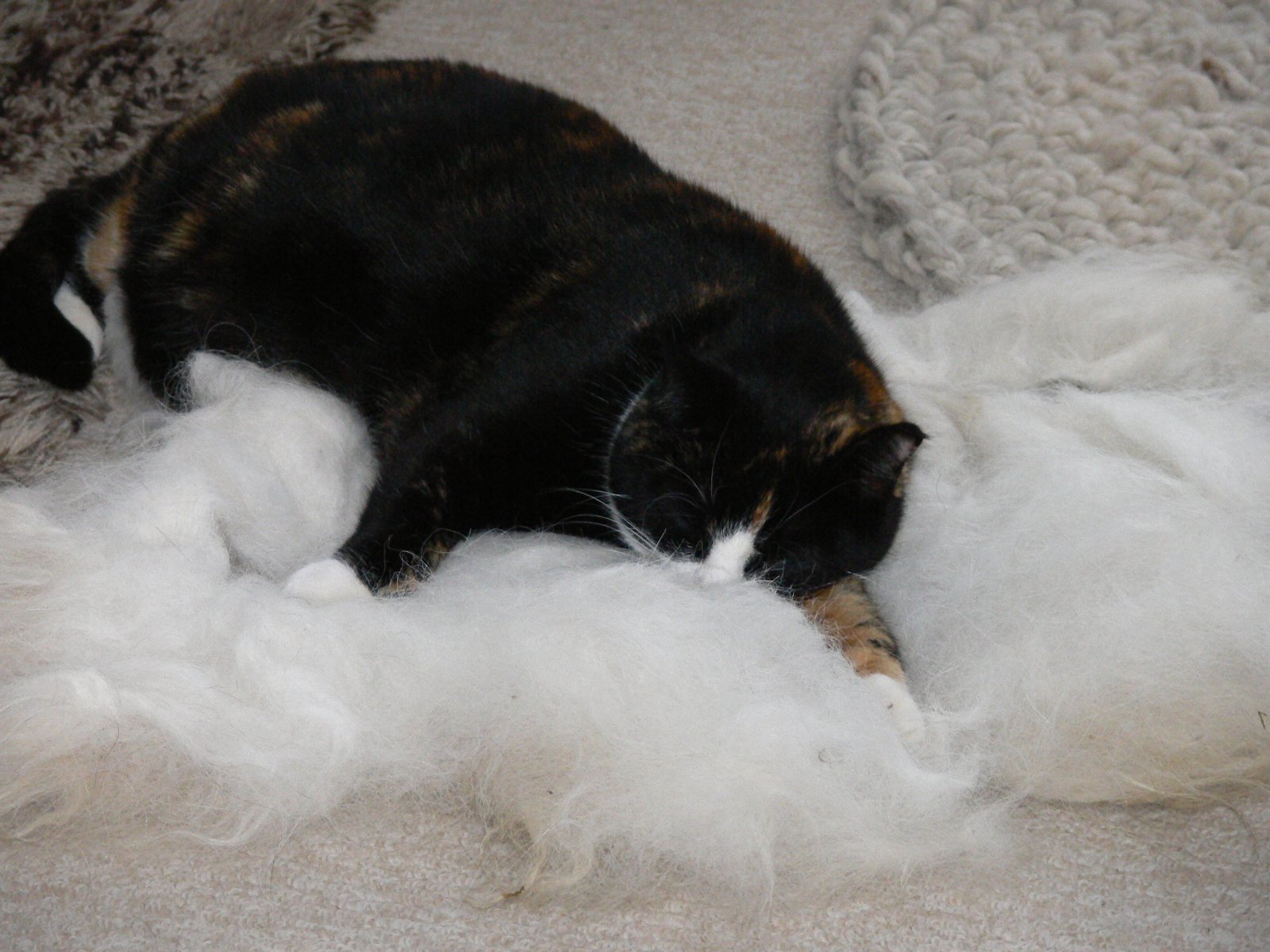 Some llamas have been especially bred for their fiber and have such fine guard hair that it is often indistinguishable from the under down.  There are however, many variations or hybrids of the fiber Llama and the Ccara llama.   Whereas the Ccara coat most often appears neatly groomed and easily sheds twigs and straw, the hybrids, along with the fiber llamas, require regular grooming and attention to prevent matts from forming.  At The Llama Sanctuary, we occasionally clip the center line of the body or ‘barrel’, leaving the legs, rump and neck intact to serve them in the winter.

Many of the llamas who are rescued and brought to The Sanctuary have received little or no attention, and often their coats are in a poor state.  The coat of the Ccara llama is less affected by such lack of attention, retaining many of the qualities and appearance of their natural progenitor, the Guanaco.   Hagar is not a pure Ccara and when he arrived at The Sanctuary eight years ago, it was apparent that he had received no attention whatsoever for many years; probably since birth.  Nor had he ever been handled, except with a snow shovel.  His coat was relatively short and consisted of one thick, dense matt, like a suit of armour, which couldn’t be brushed and proved very difficult to cut away.  Once removed however, it turned into an instant and perfectly natural rug!   TaiChi is our resident rug tester.  Above she is testing one of the matts clipped from Hagar.  What you see is the soft inside, whilst the matted outer holds the fibres together. . TaiChi takes her job as Head Rug Tester very seriously and pays great attention to detail! 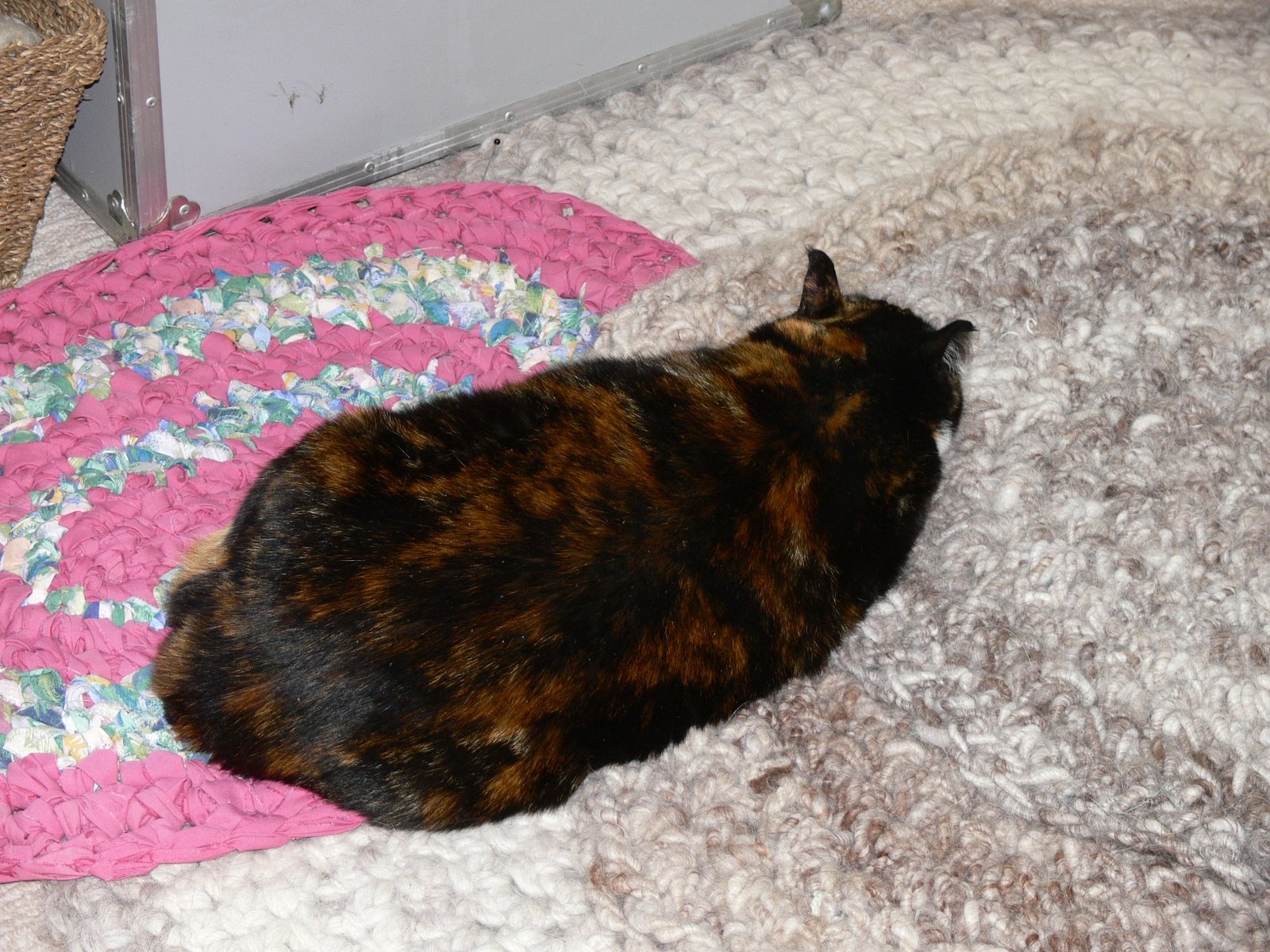 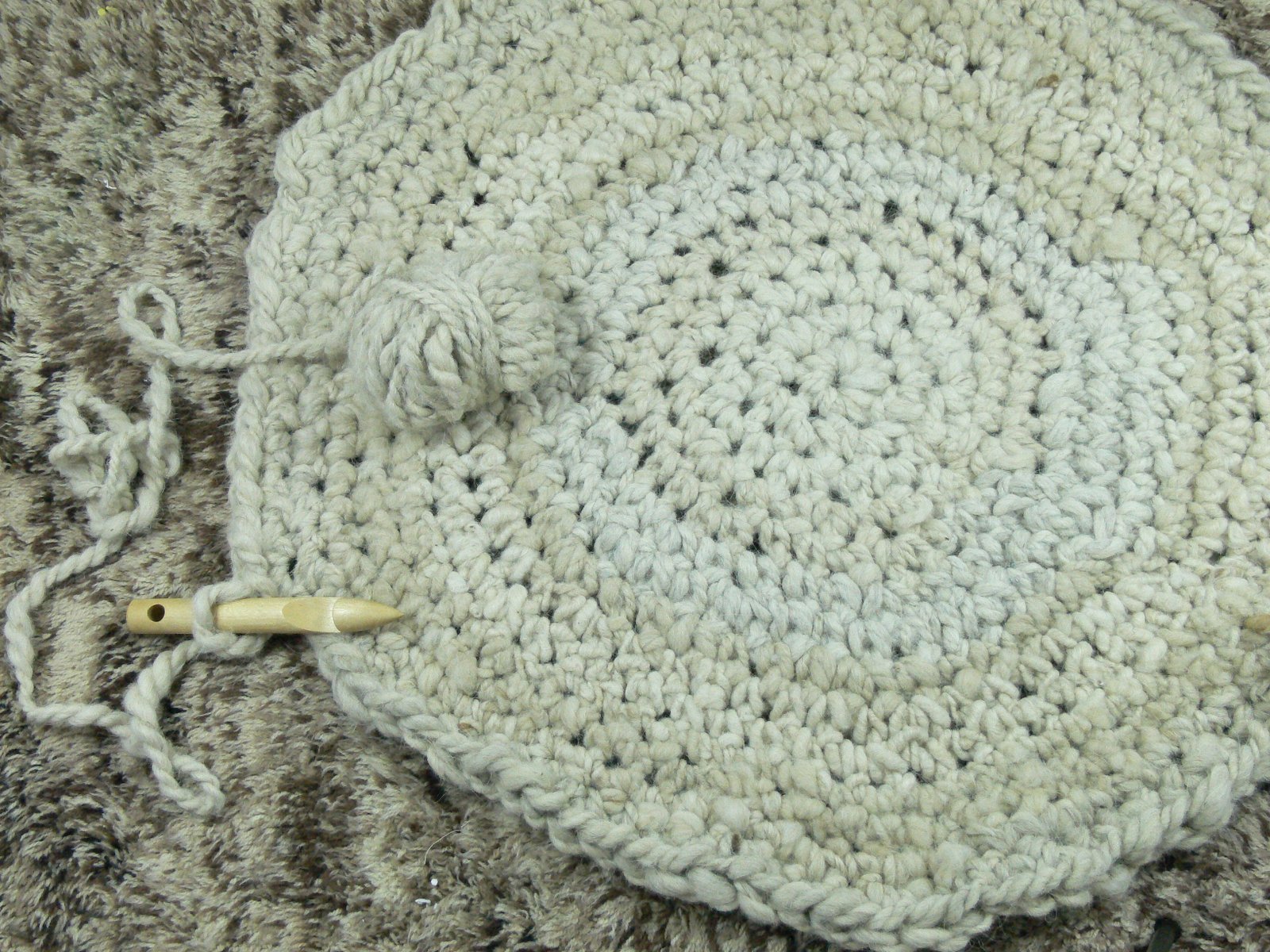 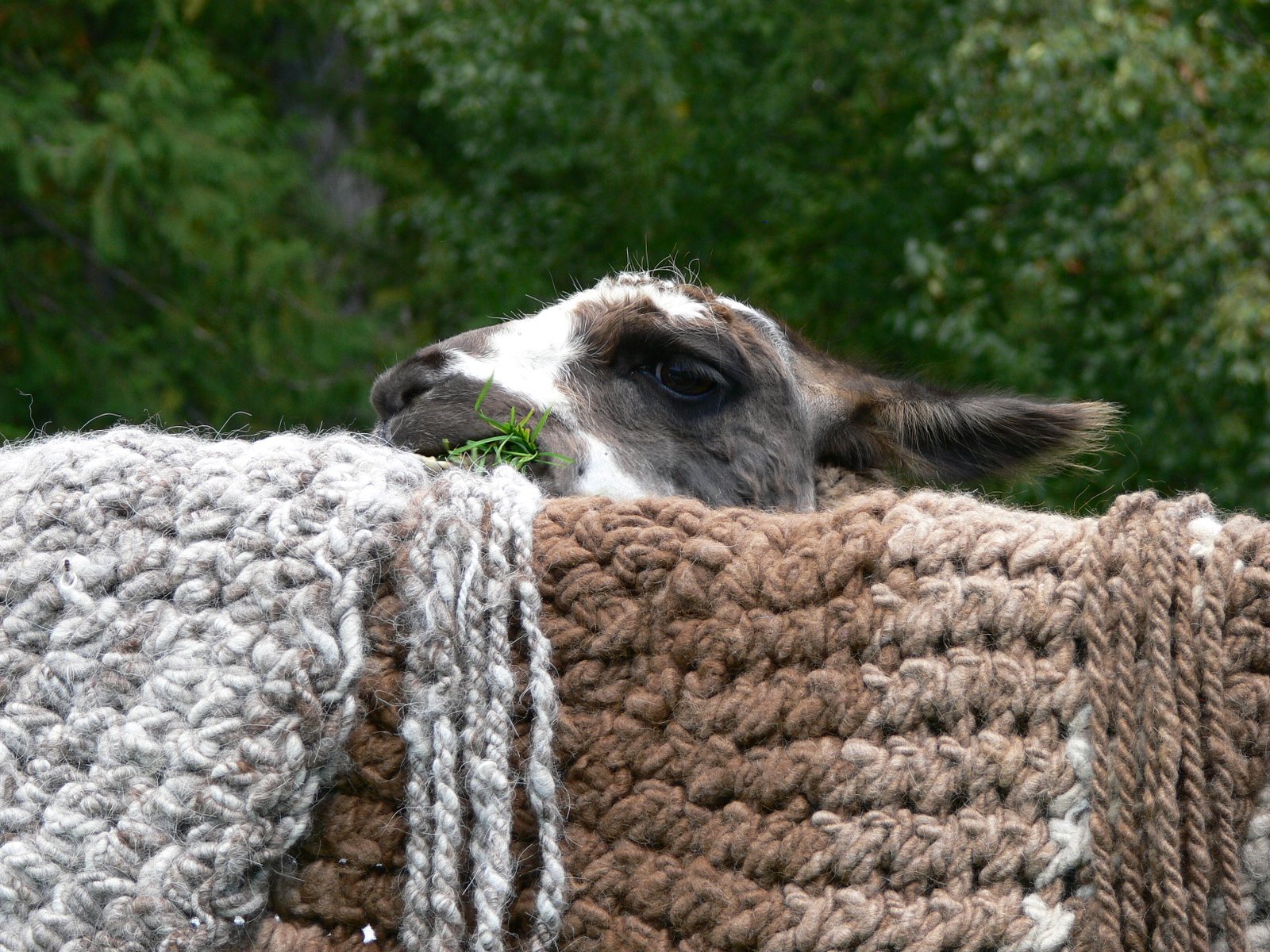 Left: Haven, another member of The Llama Sanctuary performs quality control. Where fibre is clipped or sheared from a Ccara llama, the combination of strong and durable guard hair with the soft and cozy down is ideal for making thick, hard wearing rug yarns. The rug yarn is spun on an  Indian Head Spinner, built from plans that are available here: downloadable plans and adapted to fit onto an old treadles sewing machine base.  Its cast iron fly wheel is heavy enough to drive the bobbin to reel in these extraordinarily heavy Mega Yarns, just like the ones that Haven is inspecting.

Two yarns are twined together to create this memorial rug.  It’s a work-in-progress and each of our dear friends at The Sanctuary has contributed a little of their fibre to create what will probably be a six foot runner …or maybe it will never be complete! 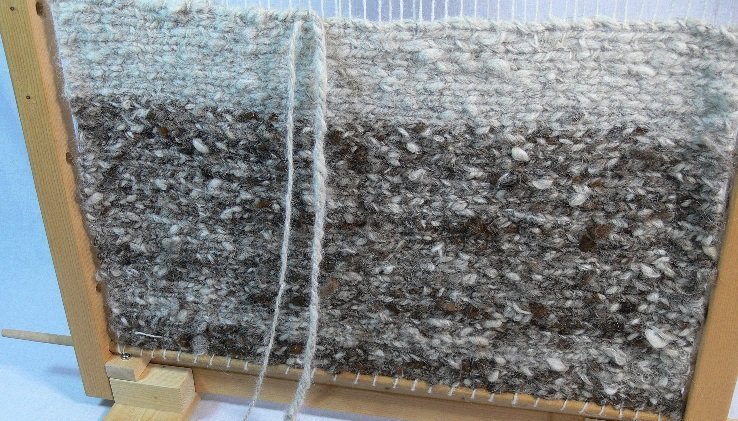 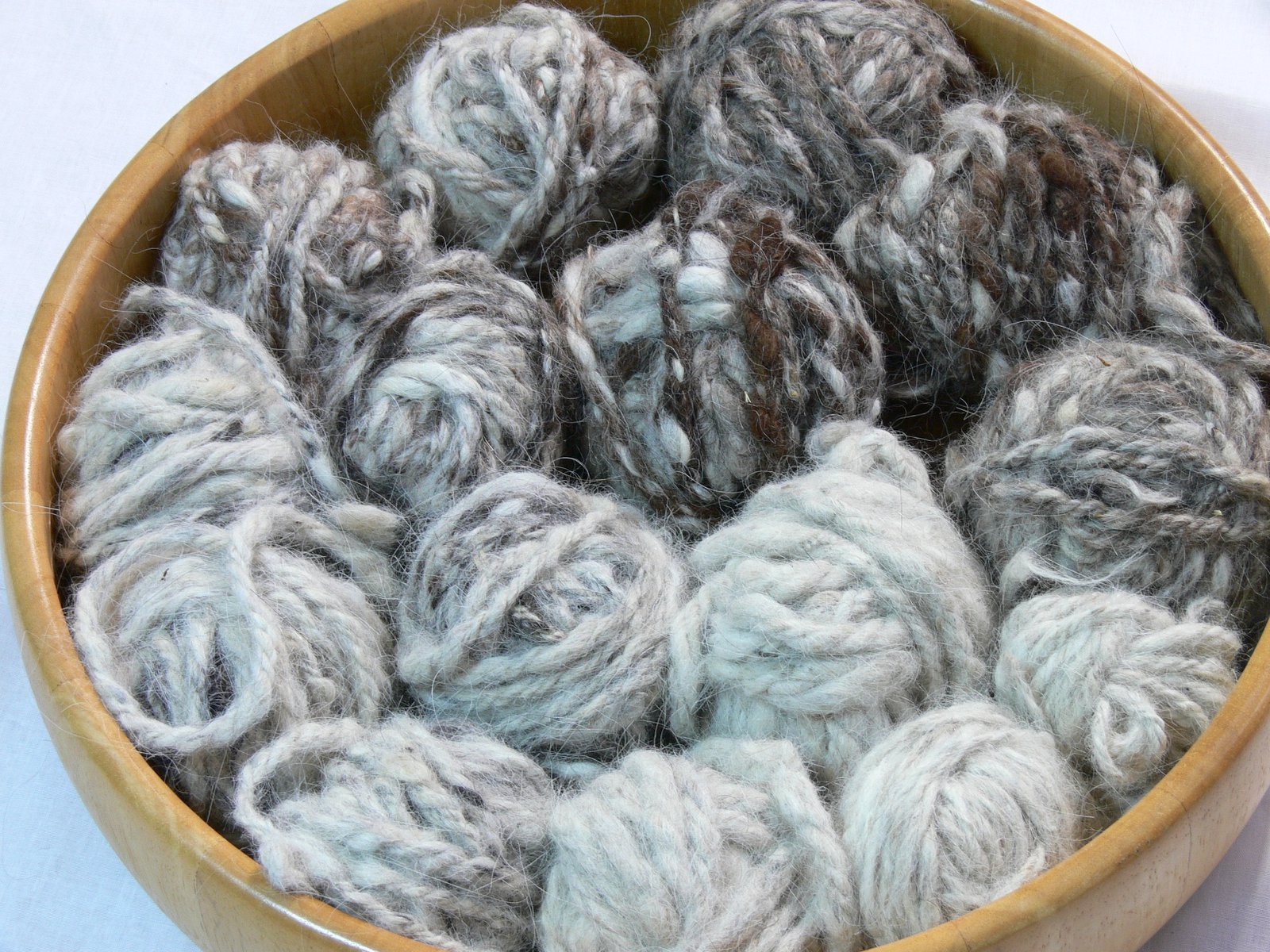 Previous posts have described the quick and easy rag rugs, woven on the Salish Loom using the Salish technique of twining. The yarn is plied into fairly short lengths to avoid the need to cut and finish the ends of these mega yarns. 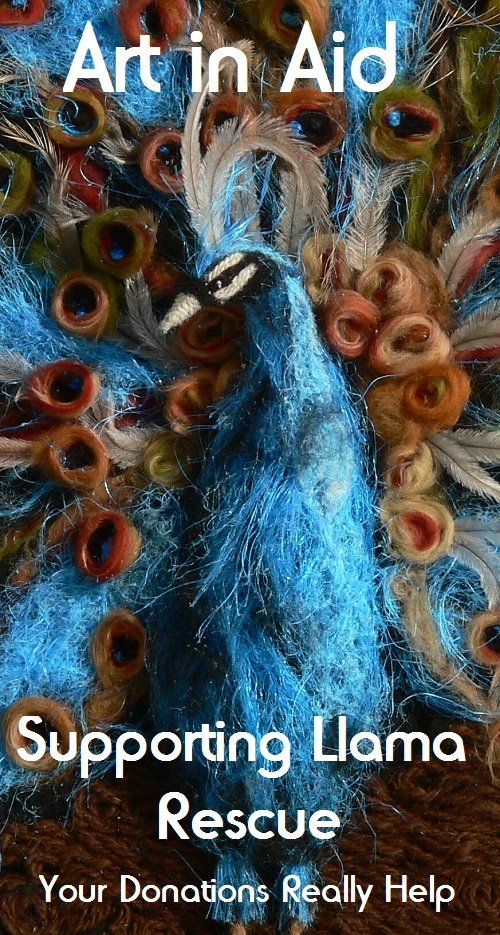