I can smell Spring time in the air!  Tiny patches of grass have been exposed along the paths in the snow, which is still about eighteen inches deep and although the temperature has swooped down to -12C over night, some tough little plants are poking through the soil around the trees.  I love watching this happen ….and so do the llamas!  I’m not quite so keen on the wet and muddy melt that ensues, but nature springs forth from its winter slumber and all seasons have their design.  We could always be experiencing drought, like 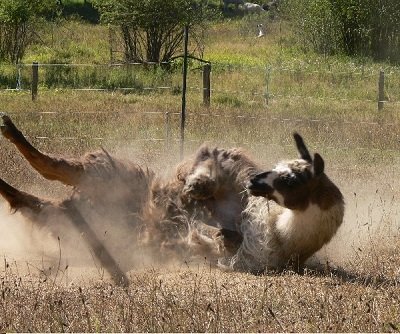 southern England right now.  Wow!  How would you like that after a hard winter?

Once the ice and snow have cleared from the hard-standing near the house, it will be time to get cracking on the fibre-cleaning once more.

The process of washing fleece and fibre requires a website all of its own, especially as we do things a little differently to most people.  We still have some unprocessed fibre from last year, but before the washing commences, it is really useful to shake out the sand and grit that the llamas collect during their daily dust baths.  It is quite incredible how much extra weight the grit adds to the fleece and it is much easier to shake it out of a dry fleece, than to wash it out of a wet one!  If you use a washing machine to do all the cleaning, you will not only wear out your machine at a rapid rate, but the sand build-up can play havoc with your septic, sewage or grey water plumbing.

Placing a handful of fibre, very loosely, into an onion bag and bashing it with a stick will certainly get some of the dirt out.  Willowing the fibre (laying the fibre out onto a mesh 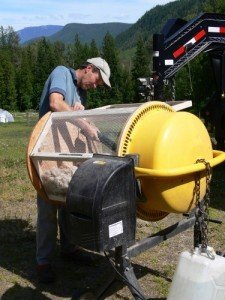 screen and whacking it with a couple of thin willow sticks) is also highly effective, but takes a lot of effort and breaks up the locks too much, especially if you want to remove the guard hair later.  Willowing can  also be done after washing.

The best solution is to tumble the fibre in a large mesh cage and last year I decided to mechanise the process.

Making a mesh covered drum was no problem, but I wanted a power source that would turn the drum slowly, for half an hour at a time.  I could have bought yet another electric motor, along with all the belt, pulleys and trimmings, but first I looked around to see if we already had such a motor that could be adapted.  The power tool motors were too small and the bench saw would need lots of extra work to slow it down, but there, right at the back of the store room, I spotted it:  the cement mixer.  It was perfect!  Extremely useful on the rare occasions that it’s needed, however, for most of the year, it sits idle.  Best of all, it is designed to slowly rotate a big drum, all day long.

The mixer drum is made in two halves, so by unbolting and removing the outer half, along with the mixing paddles, it provided the ideal mount for the tumbler drum.

The tumbler drum is simply two plywood discs, separated by six 2×2’s, thirty inches long.  The 2×2’s are doweled and glued to the plywood discs and then the whole drum is covered with a steel building cloth mesh.  My local merchant only had 5/8 inch cloth and I would have preferred ¾ inch holes, but it still does the job.  One of the sections is hinged to create a door.  That’s it. 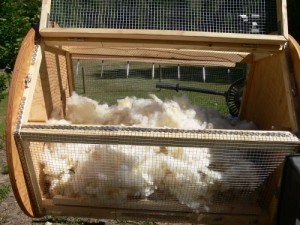 The cement mixer mechanism is a bit noisier than a belt driven motor, but it works just the same.  If it had to work all day long for months, then I would certainly consider adding a belt drive  motor.

Initially, I hung a five gallon can of water on the mixer frame, since I was concerned that the thirty inch drum would overbalance the mixer and cause it to topple over.  However, this turned out to be unnecessary.

Never load the drum more than half full, it needs the space to tumble and turn to shake the dirt out.  A couple of rows of sharpened four inch nails inside the drum help to open the fleece.  Originally, I randomly spaced ten inch wire ‘fingers’ around the inside of the drum, to work as agitators, unfortunately, they occasionally caused the fibre to hang up and then twist into a rope.  Not very helpful!

Since we only shear our llamas every other year, the fibres are usually long and we let the machine work it’s magic for about thirty minutes.  For animals that are shorn every year, the short fibres separate easily, allowing the grit to drop out, so they only require about fifteen minutes.  The pile of dirt beneath the tumbler at the end of the day is truly astonishing.  You should think twice before allowing that lot to go into your washing machine!

The next job to be done is Picking, which opens up the fibres to remove the vegetable matter.  That story will have to wait for another day. 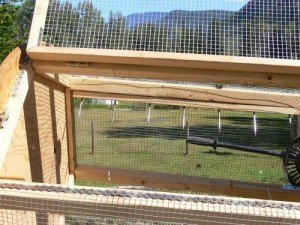 Watch out for those four inch nails when removing the fibre after tumbling, they are particularly fond of finger tips!

Warning – tumbling children and small animals can be hazardous to their health, causing respiratory difficulties, dizziness and the sharpened nails may cause multiple puncture wounds.  Apparently, some people need these warnings to prevent them doing stupid things.  (sigh)