An Introduction to Mega Knitting ~ Pt 1

I’ve been wanting to make this video for a long time, but amazingly, getting the fibre, the project and the weather to line up at the same time as finding a gap in the mountain of 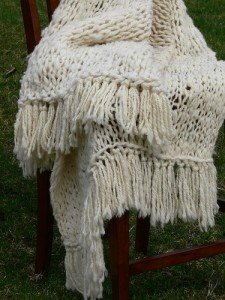 other tasks has taken a long time.  The project has also been dogged by technical challenges, not the least of which is poor sound quality.  I apologise in advance for today video, since the sound is still not very good.  Once we resolve this audio quality problem, we will replace this video with a better one .

I don’t really know how or when the term ‘mega knitting’ was coined and as far as I can determine it exists without any real definition.  I have encountered the word mega being used to describe very bulky yarns, so it would follow that mega knitting is the process of working with those super thick yarns. Of course, thicker yarns require larger diameter needles.  Since it is just as easy to knit less chunky yarns on large needles, in my opinion, it is not the gauge of the yarn that defines mega knitting, but the size of the knitting needle.  I will add here that mega knitting might also describe crochet with extra large crochet hooks.  I’m going to be very bold and lay down the definition of mega knitting, in perpetuity:

Mega knitting (also written as megaknitting or mega-knitting) can be defined as the process of knitting yarn or thread using knitting needles of half an inch diameter (size 17) and above.

There, that was quite easy.  I wonder if that makes it official now?

Mega knitting needles don’t necessarily have the carved hook that our needles have, but having discovered by accident the advantages of knitting with hooked needles, that’s what I want to show you in today’s video. 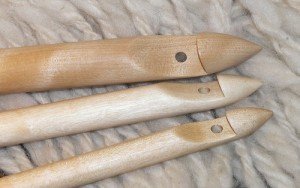 I will break the mega knitting process down into sections, each section having a separate video, but for today I simply want to cover how to use the hook on a mega knitting needle.  I’m making a large Throw (yet another knitted gift for some dear friends we left behind in the north of BC).

As always, if you have any questions or comments, don’t be shy, just ask!