The weather over the Easter weekend was so lovely, that as I sat at the spinning wheel outside, I decided to capture it on camera as a casual lesson in long draw spinning. 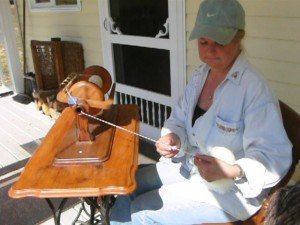 There was a lot of interest in the long draw spinning article and video we published in February this year and we also had several comments and questions relating to the old Indian Head spinning wheel.  Where to buy a machine like this?  I would suggest keeping your eye on Ebay or placing an ad in your local newspapers.  The nearest comparable machine is the Ashford Country Spinner.  It has the super large orifice and an enormous bobbin for holding the bulky mega yarns and art yarns, but it is mounted on a wooden frame and wheel, rather than a sewing machine treadle.

I have heard this machine called variously Country Spinner, Cowichan Wheel, Salish spinning Wheel and Indian Head spinning wheel.  I call it an Indian Head, which might not be the most politically correct, but it was referred to by that name when talking to a Native of Vancouver Island, which is the home of the well known, heavy Cowichan Knit sweaters, and so the title has stuck.

Due to lack of identifying marks, I have made the assumption that my own machine was hand crafted.  If you have an old treadle sewing machine, it is possible to make it dual purpose, with the addition of a spinning head, but you will have to find a local craftsman with a lathe to make one for you …unless you’re also handy on a lathe!

The large orifice makes it perfectly suited to spinning mega yarns, but it is a misconception that it cannot be used to produce fine yarns.  To produce fine, consistent yarn on a Country Spinner, keep it clean and well oiled and then carefully adjust the flyer brake.  Perhaps ultra fine yarns are easier to spin on a machine that isn’t propelled by a heavy cast iron fly-wheel, but the skill of the spinner and the preparation of the fibre are still the most important elements to spinning fine yarns.  The size of the orifice and bobbin do not determine the size of the yarn being spun.  However, I do use it almost exclusively for spinning art yarns, since it is heavy and not easily picked up and moved outside.  My little Spin Well spinning wheel can be picked up in one hand and carried outside, where I prefer to work and I have the tensions set up for fine yarns.

In this spinning session, I am using some quite poor grade sheep wool.  The fibres are 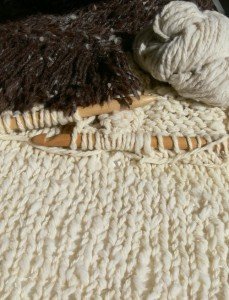 short and it is full of neps.  It is perfectly suited to the chunky, lumpy fringe yarn that I want to create to finish off yet another Throw I making for someone.

Neps, by the way, are small wads of short fibres that result either from carding problems or wool fuzz that tangles around tiny bits of debris in the fleece.  If you pull a nep apart, you will probably find a tiny piece of grass or other vegetable matter or even a bit of grit in the center.  Most often, the relatively small number of neps can be removed while carding, but if there are a great 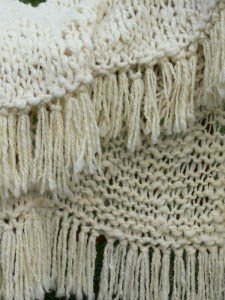 number, I’ve found it just doesn’t warrant the time spent picking them all out and I use the fibre for something that doesn’t require strength or good looks …like a chunky fringe!

Of course, this doesn’t make for a perfect spinning demonstration, but art yarn spinning is very forgiving and the large orifice on the spinning wheel happily sucks up the thick neps and thin fibres without a murmur.

Today’s spinning session differs from the last one we produced on video, by demanding a lot more fibre control to produce a somewhat more consistent chunky yarn using short fibre wool, rather than the deliciously long llama fibre used in the thick and thin demonstration.

As always, if you have any questions or comments, don’t be shy.