Itchy Socks & Baggy Bloomers – How it All Began

Turning a hobby into a full time business venture is a daunting prospect, but elevating the hobby to a fibre arts education centre is an entirely different ball game.  Just how the ball started rolling is described in this short and amusingly moralistic story, which I feel is important enough to relate to you.

Hand knitted underwear?  That’s the image that wafted through my mind  whenever I thought of, or even heard mention of hand knitted socks.  Quite how and when I created this association I cannot tell you, but in spite of being an avid knitter and experimenter of yarn 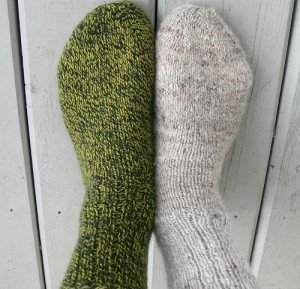 art for almost my entire life, somewhere, whilst sailing across the gulf of time, I dropped hand knitted socks into the same category as knitted underwear, which I imagined to be excruciatingly uncomfortable.  I don’t need anything else to make me itch, thank you very much, especially not there!

….and then one day, a rural friend, whom I hadn’t really known for very long and had only met on a handful of occasions, but a friend nonetheless, broke the spell by handing me a pair of socks that she had knitted.  My mental screen was temporarily obscured by a pair of enormous hand knitted bloomers, ridiculously baggy and in red wool.  From whence came this image of hand-knitted, baggy bloomers?  Perhaps it was something I learned whilst living with my Irish grandmother, all those years ago.

I hugged my friend and thanked her, not understanding yet the magnitude of the gift I had been given.

I tried them on when I returned home.  Wow!  I did take them off before getting into bed, but otherwise, those socks became a part of me.  I was smitten, bitten and gratefully afflicted by those socks.  I became thoroughly attached to them.  They were magnificent!

It was about that same time that I was formally introduced to llamas.  Another friend who had a small herd of llamas called to say she had just learned of a llama who was about to be hauled 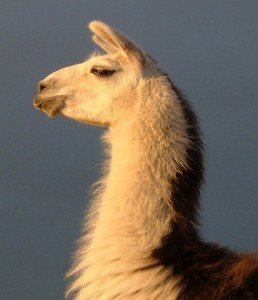 off to the meat factory, because he was a nuisance.   A couple of phone calls later, we had an agreement in place that if we could catch the llama, we could keep him.  That’s another story entirely, but welcome into my life TomBurke!  He was to be the first of many, but in the meantime I had a new itch that needed scratching. It wasn’t the woolen socks making me itch though, it was the fact that I loved them so much that I had worn them to death.  I wanted, or rather I needed to know how to make them and I was on a mission to find out.

With my own supply of llama fibre I set out to discover the ultimate sock.  I tried every pattern I could lay my hands on and knitted socks until my hands were sore.  Some socks were good, some were terrible, but socks became a core part of my knitting repertoire.  That single pair of hand-knitted socks is ultimately responsible for me starting a fibre arts education centre as well as a llama 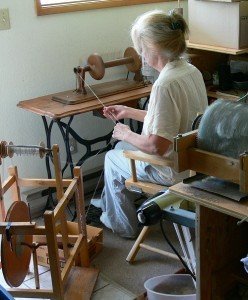 sanctuary.  My life has changed immeasurably.

I still have those gifted socks, although only three inches of the cuff can still be counted as original.  I would like to think that one day, I too can make a gift that will have such a profound impact upon the life of someone.

We should never underestimate our ability to influence others through a simple gift.