A Good Lesson on a Spin-Well Spinning Wheel

In my lengthy article yesterday, about the workings of the spinning wheel, I drifted slightly away from the opening statement that had me frustrated with the results of my spinning.  My frustrations were the result of trying to spin worsted, when I’ve been spinning woolen for so long.

What is the difference between Woolen and Worsted spinning?

The simple definition of worsted is yarn spun from long fibers that have been combed and then drawn out into a long sliver.  Woolen yarn uses fibers that have been carded, which jumbles them up so they run in all directions.  This creates an element of elasticity, as well as trapping lots of air to make the finished yarn soft and bouncy.  Woolen is usually spun using the long-draw method, whereas worsted is spun with both hands close together, usually called, no, not the short-draw method, but the ……worsted technique.

Worsted yarn is hardwearing, but coarse and non-elastic.  Woolen yarn is usually thicker, great for keeping you warm, but not very hard wearing.

There is a lot of crossover with worsteds and woolens, which could keep this blog going for a whole month, so we’ll leave it here for now.  Suffice it to say, that for the time-being, worsted is dense, hardwearing and better for gloves, whereas woolen is soft and stretchy and better for sweaters and hats.

…….so why couldn’t I spin worsted?  The answer is actually very simple: I blamed the machine! 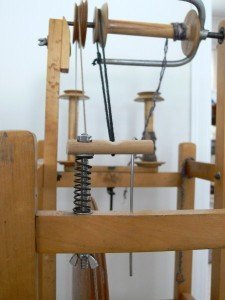 orifice, I tightened the belt and slackened the belt, I twiddled the bobbin brake, but it just would not do what I wanted it to do.

That’s when I had to resort to the basics and that is when I learned my lesson.  Every fibre and fibre mix has its own characteristics and the spinning wheel responds differently to the previous fibre it was encouraged to spin.  This is perfectly normal, but usually, the differences are small enough, that a quick tweak of the tensions will make it do what you want it to do.  However, if you have read the last dozen or so posts on this blog, you will realize that much of my recent work has involved big chunkier yarns for mega knitting.  Now that I wanted to produce something really fine and hardwearing, my hands and brain were trying to do what they have been doing automatically for months.  Even the socks have been quite chunky, but on reflection, I do recall having a few problems getting the yarn just right.

Spinning can be used as a wonderful relaxation tool and I’m certain that many people use it for this purpose; desperate to sit down at the wheel and release their frustrations and feelings in the rhythm of the wheel.  I heard someone say once, that their spinning wheel becomes an extension of themselves and they don’t even think about what they do.  They can do it with their eyes closed.  I place my bets that they also produce perfect yarn every time, BUT, and this is the BIG BUT, they will also find it difficult to change their style and produce a very different kind of yarn.  This is the reason I have made such a point about creating the habit of range testing your wheel; simply so that you don’t forget how to spin.

For me, it all boils down to not starting each task from the beginning.  The beginning point is to re-member what the spinning wheel can do and then select the test yarn that matches what you want to achieve.  The thirty minutes spent putting the spinning wheel through its paces would have saved me a lot of time and frustration in the long run. 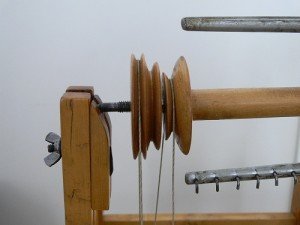 Now I have to make the big admission.  I have had the Spin-Well machine for two years and have never performed the range test on it; not once.  If I had, I would have noticed that it wasn’t actually set up properly.  I bought it from a family where the elderly mother had recently passed away and it was so different from my cast iron treadle spinner, that I just carried on using it as it was set up.  The drive belt should have driven both the flyer and the bobbin, but the belt was only driving the flyer.  David devised a little gizmo that provided for easy adjustment of the brake tension and we’ve both been blind to the error since then.

Since placing one of the drive belts on the bobbin and one on the flyer, it’s become a very different machine.  Spin-Well is quite an old company and became famous as a cheap, but highly versatile machine during the Depression years.  The company changed hands in 1948, whence it became known as Make-Well. 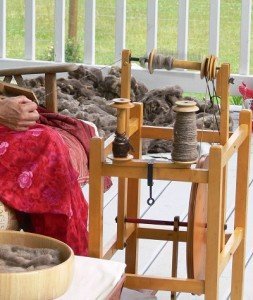 The spinning wheel looks quite crude and is most unattractive, which is actually a big
advantage, because collectors won’t be buying one to display as a fashionable piece of furniture.  From the spinners perspective however, it is compact, lightweight and extremely capable of producing a wide range of yarns.  If you see one going cheap, then I highly recommend you grab the chance and buy it. 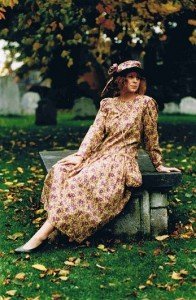 A Previous Incarnation as Clothing Designers

As an interesting endnote, once upon a time, David and I lived close to the tiny village of Worstead in Norfolk, England, where Flemish settlers first established the Worste(a)d weaving trade.  Worstead is famous for its annual village festival and it was at this festival that we first really launched our range of ladies clothing that we were making at the time.  The weaving industry has long since fled the shores of Great Britain; the last of Worstead’s industrial weavers passed away at the end of the nineteenth century.  The magnificent village church still plays host to the spinning and weaving display.  Unfortunately, I knew nothing about spinning at that time and had neither time nor inclination to learn; we bought all of our cloth, ready-made.

That’s it, I’ve made my confession, I’ve learned a great lesson and as a result, my spinning has improved.  David now has a pair of gloves and today I made a super-fine 3-ply worsted; the best I’ve ever made..