As the first of our featured artists I thought it was quite fitting that this person has chosen to remain anonymous.  Although the identity of the artist has been much discussed both on the Internet and off, these incredible works of art were all deposited or ‘Art Bombed’ in literary houses and libraries of Edinburgh in Bonnie Scotland.

Art Bombing has seen a few determined outbreaks among knitting circles, where people have coated park benches, city railings, public transport and even trees in knitting and crochet.  You can find a lot of pictures and videos on the net.  This art bomb however, is something very different.  Firstly, it’s paper sculpture, which just squeezes into our fibre artists theme. Secondly, these are exquisite works of art, rather than impromptu colourizing of public places.

The artist is quite obviously a dedicated, if not obsessive bookworm and it appears that he/she wanted to make a statement about the cutbacks to public libraries in Edinburgh and has stretched to extraordinary lengths to do so. 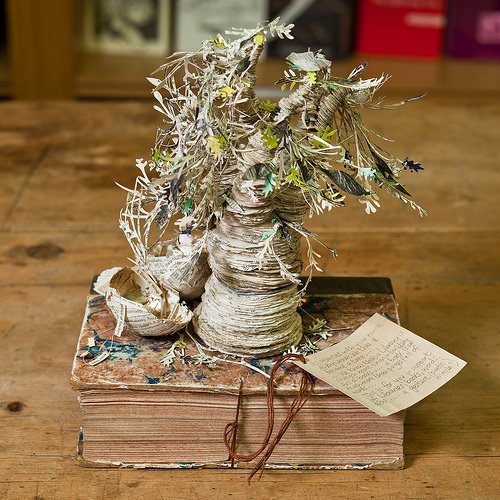 The first piece was left in the Scottish Poetry Library in March 2011 and with it a tag was left that reads:

It started with your name @byleaveswelive and became a tree.… … We know that a library is so much more than a building full of books… a book is so much more than pages full of words.… This is for you in support of libraries, books, words, ideas….. a gesture (poetic maybe?)

Three months later this delightful gramophone and coffin piece appeared in the National Library of Scotland. 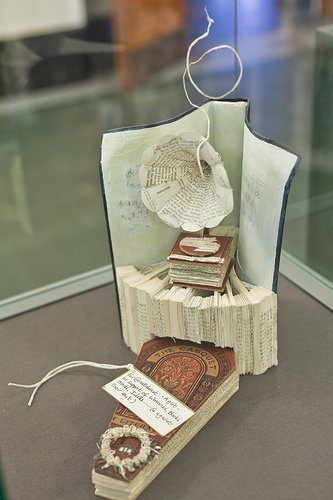 The books and text are carefully chosen in each masterpiece; frequently including reference to Ian Rankin; a chart topping crime novelist.

In July another piece appeared in the Scottish Storytelling Centre with the following tag attached:

For @scotstorycenter – A gift in support of libraries, books, works, ideas….. Once upon a time there was a book and in the book was a nest and in the nest was an egg and in the egg was a dragon and in the dragon was a story….. 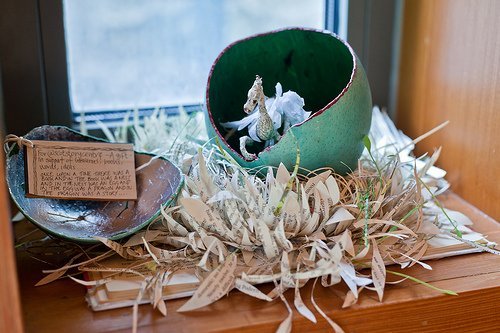 Carved from one of Ian Rankins novels, this gorgeous dragon nest was obviously created  especially for the storytelling centre.

In August, not one but two sculptures were mysteriously deposited at the Edinburgh International Book Festival, including this delightful teacup and cupcake. 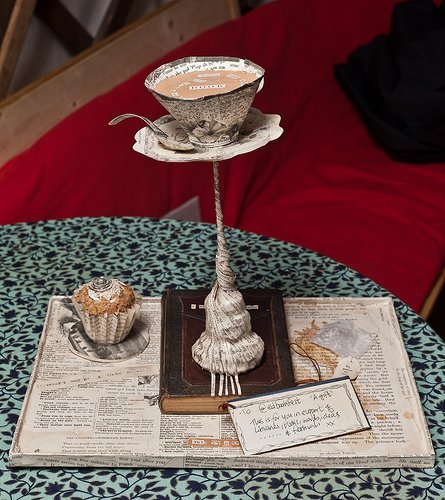 Late November this year, it appears from the clues left with the models that the final two masterpieces have been deposited including this Tyrannosaurus Rex bursting out of the pages of Arthur Conan Doyle’s ‘Lost World’.  It’s tail even protrudes through the spine of the book. 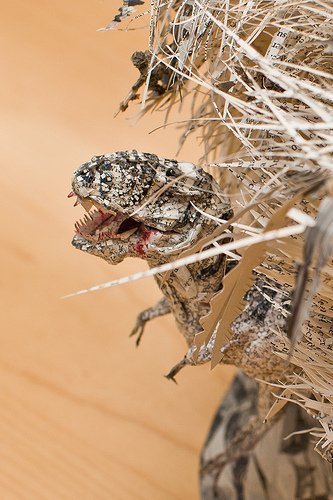 In total, the artist left ten book sculptures in various libraries.  Could it be a clever marketing ruse by Ian Rankin to promote his novels?  I don’t really think so, since it’s a bit too obvious to carve from your own books.  Other suggestions have been made, but as yet, the identity of the artist has remained concealed.  It’s early days and perhaps more clues are to be uncovered through examination of the pieces and there is talk of an exhibition to show them all together.  It is phenomenal work and it served a purpose: to promote the literary arts and the depositories of that art.

The fibre arts extend well beyond knitted hats and scarves ….and felted dragon Ipod holders!  Cellulose fibres have been beaten and  woven into apparel and furnishings for millennia.  In the case of this artist, the fibre had previously been exposed to the talent of literary artists, before being shredded into a new art form altogether.  Perhaps you think that, although this is great art, it doesn’t belong on these particular pages, but I was inspired to publish it here as inspiration of what can be achieved and of what has yet to be achieved.  Art is fluid and organic; it is constantly evolving and metamorphosing into something entirely new.  It requires silence in your mind to allow the higher intuitive sources  to flow through you.  In rare moments when you achieve that inner silence you will uncover your best work.

Be silent then and peaceful; reveal to the world what you have done so far to enthuse others.  Never fear that your work may be plagiarized; take the compliment and then move your achievements to a new level.

Thank you to the artist who not only created these amazing works, but chose to donate them to the art houses of the literary world.  Thank you to Central Station for your work in promoting all of the arts as well as inspiring me and allowing Fibre Arts Bootcamp, across the pond in British Columbia, to reproduce some of their work in this post.  Thank you to Chrisdonia for allowing me use his photographs; you’ll find Chrisdonia hanging around the pages of Flickr displaying his own terrific art form.  And finally, thank you to all artists out there for making this world a more beautiful, magical and inspiring place to live.

I’ll leave you with one of my favourite pieces – the wrens wing: 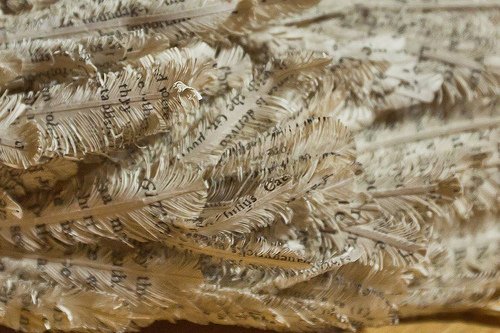