It’s about time I came along and showed my little contribution to the fibre arts.  Lynne has been clicking and clacking for several weeks, experimenting with different ideas and making various items to send to our scattered family.

Lynne and I are what you might call BOF’s (boring old farts).  We don’t participate in 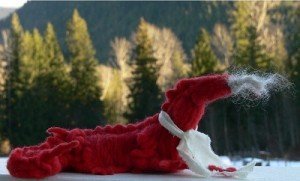 Christmas for various reasons best left to another more philosophical outlet, but we do enjoy giving without reason.  So our daughter and granddaughters, are all on the receiving list as you have seen from the cowls and throw and the slippers (yet to be shown); but what do you give a son-in-law who lives in shorts and t-shirts and is surrounded by his girls? …….a felted dragon mobile phone holder.

This might not be high on your wish list, but it has a certain novelty appeal, especially when its kitted out in your favourite football team colours.  So here it is: 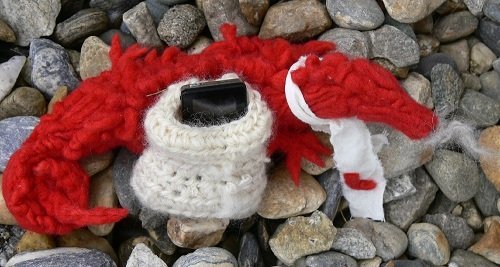 I’ve needle felted quite a few llamas over the years, using the fibre from the reject bin, but this was something new.  Having felted the body and neck, I grabbed a hank of old homespun yarn, which I seem to remember was part-and-parcel of one of the spinning wheels we bought a few years ago.  The small quantity of gaudy pillar-box red has never really fitted in with the rest of the crew in the yarn store, so here was it’s chance to make a statement!  Chopping it up into short lengths, it was felted onto the Dragon as though modelling with clay.  It certainly adds both texture and elements to this historically, knobbly creature.  Legs and feet, dorsal ridge and tail all metamorphosed from chopped up yarn.  The puff of smoke was just a pinch of fluff from the workroom floor ……say that ten times quickly! 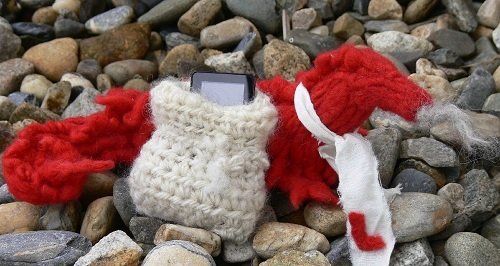 The little sac to hold the mobile phone or IPod?  Yep, that’s my first attempt at double crochet; I think that’s what Lynne said I was doing. Perhaps I’ll learn single crochet one day.  I now proudly elect myself to the small group of people called ‘men who knit’.  The sac was felted onto the body of the dragon, but on third and fourth thoughts I decided to add a couple of stitches through the body (difficult through a hard felted body!!), to ensure its permanence.

With less permanence in mind, the scarf with the ‘L’ for Liverpool FC is only loosely tied on just in case Jason has a change of heart at sometime in the life of this dragon and switches his allegiance to another team.  You never know!