Build Your Own Salish Loom for Rag Rug Weaving

A passion of mine for many years has been rugs; I simply adore wooden floors and thick rugs!

Rugs crocheted from super chunky llama yarn are for special places in the house, where the delicious sensation of ‘mud squelching between the toes’ can be truly savoured (is that a trifle perverted do you think?), but for high-traffic areas and ‘standing zones,’ then ra 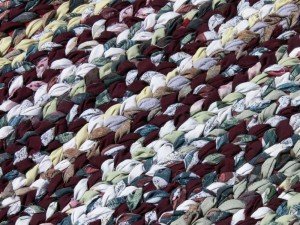 g rugs are superb.  No toxic, formaldehyde and plastic carpeting and virtually no expense, you can be confident that these rugs will be safe and serve you well, whether in the kitchen, bathroom, bedroom and even as a play mat for your baby.

Rags have been converted into rugs, probably for centuries.  In fact, rag-rugging might even qualify as one of the earliest of man’s …or wo-man’s, deliberate recycling efforts. Rags are plentiful and cheap and with very little effort, they can be converted into attractive and hard-wearing floor covering.  My first rag-rug experiments involved crochet. This proved both awkward and not a little uncomfortable on the hands and I knew there had to be a better way.  With the exception of jersey fabric, most rags have little or no elasticity and are not easy to manipulate with a hook, but for weaving, rags are ideal. 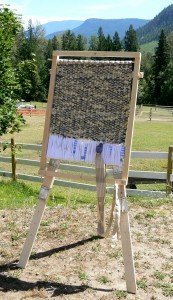 The Salish are coastal people indigenous to the Pacific Northwest, extending from Washington State up to Bella Coola in British Columbia.  The Salish people have a long history of fiber working and are renowned for their beautiful weaving.  Weavers were highly revered for their craft.   Just harvesting and converting the raw materials, whether from plant, tree, Mountain Goat or the specially bred woolly coastal dog into useable fiber took great skill and much time.  A Salish woven blanket would become a treasured item, with tremendous spiritual and tribal significance.  These blankets were woven on a very simple loom, consisting of two upright poles and two cross members, lashed together to create a blanket or cloak of the desired size.

It is this extremely simple design that attracted me to the Salish loom.  Over the years I  have met several would-be weavers who splashed out thousands of dollars on looms, only to have them sit dormant in their homes, sometimes occupying an entire room and yet producing nothing.  Why?  Complexity!  Modern looms have become so complicated that without training and persistence, they become mechanical follies; destined to gather dust for years.  I have no doubt whatsoever that I too, lack the perseverance required to sit at one of these all-singing, all-dancing looms for hours on end, that is if I managed to fathom out how to warp the thing in the first place!

Build Your Own Salish Loom

No sooner had I told David what I wanted in the way of a loom and he was off to the shed to see what could be done.  After a couple of prototypes and a dozen additions and alterations, not forgetting the numerous experimental rag rugs and rag mats, the Salish Loom was reborn and once again, we want to share this with everybody!  For a few dollars you can download the plans and  build your own Salish loom.  This is an easy home-build project!

The FAB Salish Loom Package features, not only two versions of a simple to use loom, but a removable floor stand that allows the loom to be carried anywhere.  It’s lightweight, so pick it up and carry it out to your favourite sunny spot in the garden or stand it on a table in front of the stove and you can work this loom sitting down or standing.  We have also designed a fully adjustable, fold-away easel that places the loom at the perfect working height. 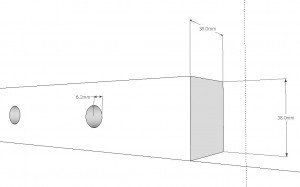 The easel is multi-functional, designed to serve all of your art and craft project requirements.  The loom is small enough to slide behind the sofa and light enough to carry out to the car with one hand.

We have created a series of videos to help you get started with your rag rug loom and they will be up on the Internet any day now.

You can convert almost anything into a rag rug ….well, as long as it’s soft and pliable!  That hideous skirt you bought twenty years ago and wore once, out-grown or stained t-shirts, old bed sheets and duvet covers, even old socks can be sliced up and put to good use.  To get started though, I would recommend a trip to your local Charity Shop or Thrift Store.  They usually sell bin liners of old clothes, bed linen, curtains etc for just a few dollars. These are things that they wouldn’t ordinarily be able to sell in the store, but I have found them to be superb for rag rugging.  A bag of bed sheets for five dollars can produce around half a dozen rugs and if you don’t like the colours, what can you do?  Dye them!

A typical recycled rags rug will cost you no more than a cup of coffee.  Of course, if you are very specific about the fabrics you want in the rug, then you will have to pay more for new fabrics.  You can be sure though, that you will get what you want for a fraction of the cost of the shop-bought item.

Just because the loom is very simple, it does not mean that it cannot produce beautiful and complex items.  The loom is simply a frame to hold your artistic talent;  bells, whistles, pedals and levers won’t make you a better weaver, but a loom that you made for yourself, will give you greater pride and hopefully inspire you to keep that loom in daily use.

For more information about the Salish Loom Plans, visit the FAB Online Store