‘Show of Feathers’ Wins The Competition

It Won! – ‘Show of Feathers’ – The Winner of The Latest Secret Stash Competition

I know I’m ‘blowing my own trumpet,’ but it does feel good to win, even if the only prize is recognition.  Then again, that’s what Fibre Arts Bootcamp is all about: developing awareness of the fibre arts, promoting the use of natural fibre and raising money for the Llama Sanctuary, and if winning a completion achieves all of that, then I ought not to feel too guilty about honking my horn in public! 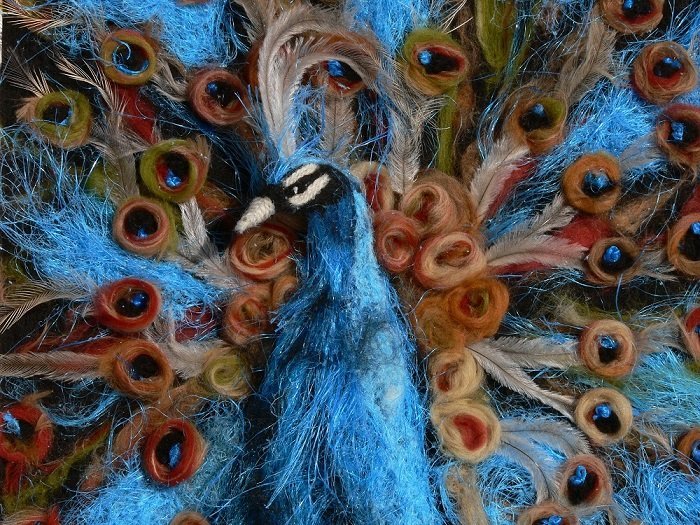 Organized by Arlene Ciroula from Spin Artiste  , this competition is designed to stretch the imaginations of fibre artists, by presenting them with a package of materials from which they must create something in a given amount of time.  All the entrants receive a similar package.  Although item colours may vary slightly, the materials are the same.  Usually it’s natural fibre, in one form or another, but the package usually contains a ‘wild card,’ something that you wouldn’t ordinarily find in a craft cupboard or an art studio.  This time, it was a coil of used baling twine and a bunch of emu feathers.

When the package arrived, of all the items, it was the shiny blue baling twine that leapt out, crying “Me, Me, Me.”  This was in direct contrast to the images that had formed in my mind, having seen the photograph of the contents on Spin Artiste, prior to their arrival. 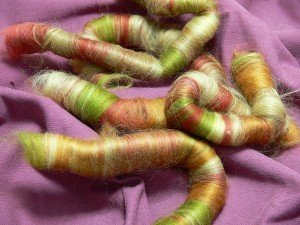 Colourful Rolags Formed on the Blending Board

Feeding thirty llamas and alpacas during the winter, we accrue a lot of baling twine and in addition to the million and one other uses to which it is put around the Sanctuary, I’ve used it quite a lot in my artwork.  This time though, I wanted to do something really special with it.

Teasing open short lengths of the twine with a flick carder, I then worked them on the drum carder, whilst holding one end and kept working it until the end became feathery.  Only then could I see what it wanted to become!  Further manipulation with a fine flick carder, not only created the fluffiness, but also lightened the hue and brilliance.  I wanted some shimmer, but not gaudy glitter.  It is incredible how much the small loop of baling expanded, once it had been flicked for a few minutes.  I even had some left over.

The background was formed by creating a wet half felt from the black roving, with more of the roving used to build up the substance of the peacock’s body.  The brown yarn was Navaho plied and then cabled to create a lumpy bumpy texture which was needle felted into place to create the ground.

The core of the peacock’s head was fashioned from the remainder of the brown yarn, using a felting needle, with a little black roving to cover.  No white fibre was provided in this kit; however, there was a tiny scrap of white yarn used to tie the hank of brown yarn and this was carefully overlaid to create beak and face.  The glint in the eye came from an un-dyed sliver of baling twine; a rare and lucky inclusion indeed! The Suri locks offered themselves to be the feet and claws, as well as adding substance to the roundels, with which I had great fun.   The coloured merino rovings and suri locks were blended on our newly designed blending board to form dense, yet hollow rolags.  These were then sliced and needle felted into place over the emu feathers, then, like vol-au-vents, each was filled with a thin felted pad of black roving and finished off with a gem of blue baling twine.

David made the white, wooden frame to support the picture, which I have counted as my single addition in the project.  Although, one of our llamas believes himself to be quite the peacock, he refused to ‘strut his stuff’ before the camera, while we were photographing the picture.  He would have made the perfect backdrop!

The diversity of creations in the competition was amazing, as was the imagination and standard of work.  People felted and decorated delightful hats, scarves, a purse, a dream catcher, an art yarn, together with an array of art pieces that crack open a little window onto the unlimited potential of the human imagination.

This may sound weird, but I truly believe that the fibre knows what it wants to become.  Perhaps one of the most important lessons I’ve learned from these competitions is that spending a little time, just sitting with the material and allowing your mind to wander, can move you into a different dimension, where creativity is waiting to speak to you.  That is the goal of all artists, to be at once both art and artist.  A few years ago that would have sounded like cliché to me, but now, I know there’s something to it.  I only wish I could live in that space forever!

Sound scary?  Have a go!