The sun was shining, the llamas were full of kisses for everybody and judging from the smiles all around, I would say everyone had a great time at the latest in our series of fibre arts workshops. 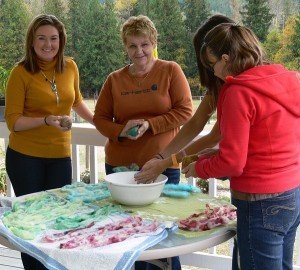 Saturdays subject revolved around a curious desire to wrap a bar of soap in coloured wool.  Weird as it sounds, felt-wrapping is  a great way to get the most out of a bar of soap.  The wool or fibre helps to gently scrub and exfoliate the dead skin as well as whisking up a good lather.  It also eliminates the crumbly or soggy stub of soap that you end up with near the end of the life of the bar.  Is it only me that hates to waste the end of the soap?  I spend ages massaging the stub on to the new bar, but it seldom sticks for very long.

Anyway, to make the felt attractive, we first of all, had to dye the wool and that proved to be the best part of the day ….perhaps, with the exception of meeting Rambo, one of the newcomers to the llama sanctuary, whose owner tragically died, leaving him homeless.  Rambo nuzzled and kissed everyone in turn, showing his gratitude to everyone on the course.  All of the proceeds from the fibre arts workshops and the sale of yarn and mega Hooks, goes to looking after the llamas and alpacas in the sanctuary. 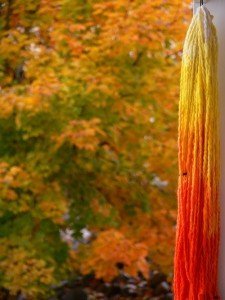 flourish of reds and golds and pale yellows in the dye pot.  I am so grateful to everyone who attends these workshops.  I learn so much and am inspired by seeing other people creating what they like, rather than being directed by my own desires, which so often become stuck in a rut. Recently, I have been in a colour rut of purples and blues, but that all changed on Saturday as we hung the huge hank of brightly coloured yarn to dry outside and saw how it reflected the colours of the backdrop of maple and birch.  Thank you ladies!

I’ve been experimenting for several weeks now with natural dyes: plants and lichens and bark harvested from the forest.  This has been such an interesting experience that I will just have to share this in another workshop in the future.  I have jars and jugs and demijohns all around the studio now, each containing a different coloured tincture from nature.

This coming Saturday is the Creative Spinning workshop that had to be rescheduled after TomBurke, our long term companion, mentor and head of the herd sadly left us on the morning of the previous scheduled workshop.  He’s gone now to join the great llama herd in spirit.

This workshop is not only for those who booked previously, and it’s not too late to join us this weekend if you want to learn how to spin on a drop spindle.  We’ll be working on the drum carders to produce a pile of colourful batts and then we’ll convert that fibre into art yarn using the simplest spinning device in existence – the drop spindle.  Check the events calendar on the sidebar or the FAB workshops tab in the menu at the top of the page for more information about the workshop. 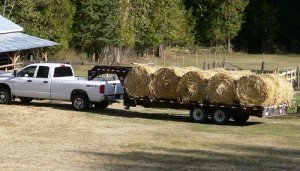 Time to chase some llamas now.  They have seen the new hay arrive; they can smell it and they are going crazy in anticipation of happy winter munching.  Sigh…. They’ll soon grow tired of it though and then they’ll be itching to get back on to pasture once more.

Until next time – get out and be inspired by nature