Socks In The Grease

One of the age old debates amongst spinners is whether is it better to spin in the grease.  It is purely subjective, in my opinion.  If you like feeling the grease on your fingers and you don’t mind cleaning the spinning wheel afterwards, then go ahead and spin in the grease, but it’s not my idea of fun.  Now, here comes the ‘however.’  I’ve been spinning in the grease quite a lot recently, in order to make several pairs of ‘socks in the grease.’ 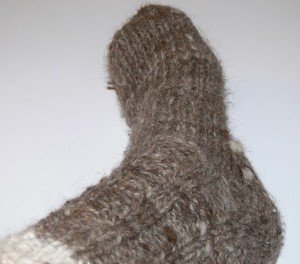 I can’t say I enjoy the grease part, but it does feel nice on the hands, providing it doesn’t get too sticky.  The knitting needles need cleaning afterwards, or at least wiping with a cloth.  Likewise the orifice on the wheel can become sticky and create extra drag that requires, either regular cleaning or retuning the wheel, to maintain the right amount of spin.

Why work ‘In the Grease’?

Winter can play havoc with your feet, especially if you spend a lot of time wearing snow boots, like I do.  My feet become incredibly dry; presumably from the synthetic boot-liners.  The answer appears to be to wear socks, made with some sheep wool, still in the grease.  Obviously, I prefer the wool from our own llamas, but I usually blend in a little bit of sheep’s fibre, to provide more stretch and shape retention.  Llama and alpaca don’t have any grease; their fibre is extremely soft, but completely dry and smooth.  Adding the greasy wool is great for the skin. 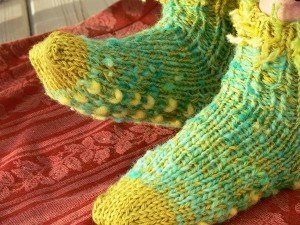 I’ve tried so many different sock patterns and have shown a few here, but I’ve finally devised a pattern, from a mix  of several others, that I really like.  I will write the pattern down and share it with you here.  Regardless of the pattern though, the greasy socks have worked wonders for the dry skin problem!

A little tip I discovered too, is that being in thrumming mode this winter, I hooked a few  thrums to a couple of other pairs of socks.  Using thin roving that was still in the grease has made a huge difference on two accounts.  It not only helped keep my feet soft and smooth, but it also reinforced the heel  of the sock, which, despite being knitted in double thickness yarn or a harder wearing stitch, is still prone to wear thin quite quickly.  The roving felts into the sock and it can easily and quickly be added to, if it wears thin.

A good few years ago, I read a very interesting book called The Brendan Voyage. A group of hardy or crazy explorers, decided to replicate a journey made by a monk, later named St Brendan, about 1500 years ago.  They  built a boat with a leather skin and sailed it across the Atlantic Ocean to prove that it was indeed possible that the ‘Promised Land’ was in fact Nova Scotia or somewhere on the west coast of Canada; I don’t remember the exact details.  On their journey, they stopped off in Iceland, where they met a farmer, who was distressed by the state of their hands.  The farmer asked his wife to make some Icelandic mitts for the sailors.  Having given them all mitts, made from sheep wool very much in the grease, he then asked to join them on rest of their journey;  “I won’t be long love, I’m just going to show these boys the route to Canada, I’ll be back for dinner!” 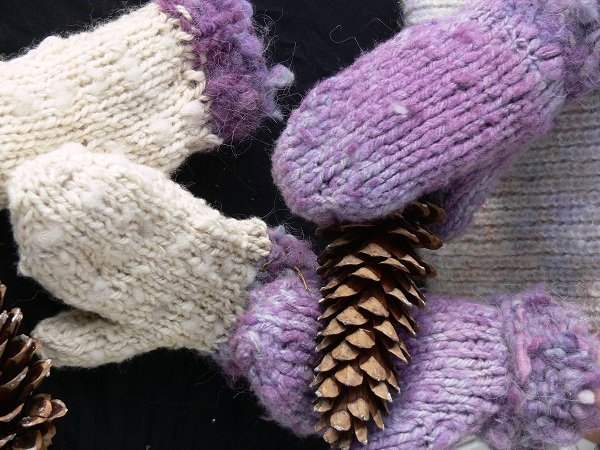 Once in the boat, the first thing he did, to the amazement of the rest of the crew, was to plunge his mitt covered hands in the icy ocean water.  He said, if you want to stay warm, you have to wet your mitts.  They followed suit and were utterly amazed to find that their hands were always warm and the grease from the wool, preserved their skin beautifully.  No more salt-scoured sores.  There’s a lot to be learned or should I say ‘remembered’ about how to use the simple things that we’ve had for thousands of years.  Most often, we don’t need the modern technology, we need to rediscover what we’ve already been given.

Socks in the grease; give them a try!