What is Mega Knitting?

A recent comment by a reader of this blog opened our eyes to a glaring omission in our websites and the portrayal of the work we do here:  “What is Mega-Knitting?”

It’s a simple question, but it led me to really think about it.  Firstly, I started knitting when I was very young and took it for granted that everyone else was taught the same.  Moving in circles of fibre artists, it’s easy to believe that everyone knits or crochets, but it was a shock to discover that so few people these days, know how to work with yarn. 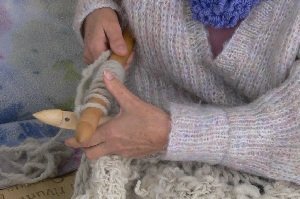 using jumbo knitting needles and crochet hooks.  Previously, it was just another needle size, albeit a needle size that you didn’t find on most size charts.  Actually, I wanted needle sizes that were very hard to obtain pre-Internet or in local shops.

My progression to mega-knitting occurred when I learned to spin and that was much more recently, after I moved to Canada in 2003.  I started using big needles to knit the lumpy, bumpy, super-sized yarn that I enjoyed spinning.  I quickly discovered that big knitting needles added an entirely new dimension to my work with the extra-chunky art yarns and furthermore, when I showed other people how to knit, I realized that the learning experience became easier, faster and much more fun.

Adding a hook to the end of the needle is a very recent innovation.  Previously, I would have bought a size 20 knitting needle and a size 20 crochet hook.  It never occurred to me that they could be one and the same and it reminded me of a really poignant tale that I heard years ago and applies to many areas of our lives.  Indulge me whilst I tell the tale:

A couple had recently married and the young girl wanted to cook a Sunday roast.  She bought a joint of meat and all the trimmings and as she was about to put the joint in the oven she sliced half an inch from each end.

Her young husband innocently enquired why she had sliced the ends off the joint.  “I don’t know” replied his wife, “I learned from my mother and she always did that.”

The husband remained curious and asked his wife to ask her mother, the next time she spoke with her.

Later that day, the young girl telephoned her mother and put the question to her “Mum, why did you always slice the ends off the joint of meat before placing it in the oven?”

After a brief pause, her mother replied “I don’t really know, my mother always used to do it.”

So the girl telephoned her grandmother and said “Grandma, when you used to cook a Sunday joint and you were about to put it in the oven, why did you slice the ends off the meat?”

The grandmother replied simply “Because I had a very small oven.”

So there we go!  How often do we do things without thinking?  How often do we think that all that can be discovered in our particular field of interest has been discovered?  We are scratching the surface of the fibre arts in much the same way that we are scratching the surface of life!  There is so much more to discover.  Never be self critical if your work doesn’t turn out the way you wanted, you might have discovered something new.  If you  cannot find a pattern for an idea you have, don’t be afraid to try designing it yourself.  Play with new techniques; try using needles and hooks in a different way.  You are expanding your own brain power, which has been proven to promote better health and longevity and there are no limits to our capabilities; the only limits are imposed by our thoughts.  If you don’t use it, your brain will tire and give up.  Use it, imagine with it and create with it; it’s a gift we all have. 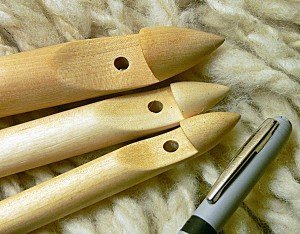 Back to the question: In a nutshell, mega-knitting is knitting or crocheting on big needles.  My own idea of big is size 20 and above (that’s 5/8”), but there’s no official size designation.  Neither is there any mystery to it;  Mega knitting needles don’t always have hooks at the ends, but ours do, because we’ve found them to be extremely useful and never a hindrance.

It’s a rather roundabout way of answering the question: ‘What is Mega-Knitting?’ and we’ve had a few diversions along the way, but I hope it inspires you to keep on pushing the limits of what you think you are capable of and perhaps come up with a crazy new knitting technique that no-one has yet thought of or revealed.

Let us know if you do discover one!