When I grow up, I would like a proper pair of working snowboots.

I resemble our dear little bantam, Kiki Dee.  Kiki Dee has hugely feathered feet and she and I waddle along together, swinging each foot out sideways to clear a path in the snow for our unnaturally huge feet.  I have a problem with Canadian footwear; I have very small feet and wellington style snowboots simply won’t stay on.  I end up buying a child’s style, yet again.  These are not practical; the leg is nowhere near high enough and I have to grapple with Velcro fastenings.  The smallest adult boot of the kind I need, is about three sizes too big and the result is that I have to wear three pairs of thick socks to take up the excess.  It is tiresome having to clothe my feet in three pairs of socks to go out and then peel them all off again later.

David and I start work during the week at 4am;  my body doesn’t recognize Saturdays so I am awake and raring to go at the same time.  Last Saturday, I decided to make myself a pair of socks to wear inside my waterproof boots and save myself considerable time in dressing and undressing my working feet.  I didn’t want a full sock that has to be stuffed inside my working trousers, so I hunted around the internet and found a pattern for chunky slipper socks which I could adapt, and began work. 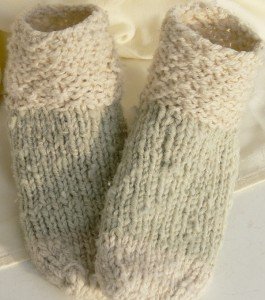 I love working on double pointed needles; my very first knitting project as a child was a pair of fingerless gloves for my father, and my needles are beautifully crafted by David; with hooks, of course!

I quickly plied two singles for a ribbed cuff, which I intended to spiral, in order to grip my ankle really well.

I prefer to cast onto all four needles; this is particularly easy if you have a number of stitches divisible by four.  Although, more fiddly, I prefer it to transferring stitches later.

I have realized that I will always do whatever I can to be able to knit continuously and not have to stop to pick up, put down, transfer, etc!  I always work one row of knit after casting on.  This creates a very nicely corded edge on the right side; it is also an easier foundation row on which to start ribbing as I can clearly see the stitches.

Next: I Navajo plied one of the singles to increase the gauge for the next two sections: heel flap and instep.  For beginners, a hooked needle is very useful when picking up stitches on the heel flap.

I use the cast on tail as my end of round marker and knit it into two stitches (backward and forward) to save me having to use a bodkin to weave the tail at the finish.  When you have all your stitches cast on, knit the tail, together with your yarn into the first knit stitch (forward weave).  Leave it in this position of first stitch at beginning of round.  When you come to the end of the knit round, pick up the tail from the next stitch and knit it in with your yarn (backward weave).  You can then use the intarsia method to weave the remainder of the tail up the work at each round: lay it alternately in front and then behind the yarn at the beginning of each new round, ensuring that you leave enough showing to continue to be your end of round marker. 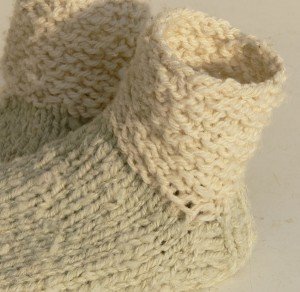 By the time I had plied the third yarn for the toes: two of the earlier Navajo’s, it was six o’clock and I was ready to start knitting, without stopping; barring one possible exception! David had arrived and made our early morning half pint of thick, thick organic, fair trade, vegan cocoa.

At nine o’clock I dressed myself to go outside and do my bit; morning feeding and swopping the llama groups so they all get the chance to roam the forest.  It was heavenly to pull on ONE pair of socks, that didn’t have to be planned before the trousers, or else stuffed inside the leg as an afterthought!  I felt sorry, but was pleased that I didn’t have to join Kiki Dee in her swinging gait; I was thrilled to be able to run alongside the llamas through the beautiful woodland and waterfall trails with comfortable feet, free of pain and strain from crunching toes to keep the boots on.  How lovely it was later to pull off boots, and wear the same single pair of socks inside the house!

What took me so long!!

The next pair will be improved slightly; having had so much fun thrumming mitts and slippers I will try thrumming with greasy wool to help my worn out heels and I will make the ankle fractionally longer. 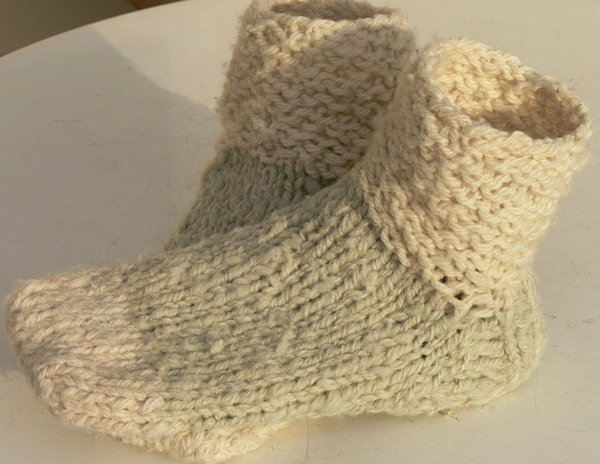