Sitting indoors smothered in a thick woollen blanket that’s growing bigger every minute is hot work, so I grabbed this very brief opportunity to sit outside and make the finishing rounds on the second ‘Granddaughter Project’.  It’s one of those rare moments for this bleak time of year.  The sun has just enough strength to nudge the thermometer above zero (Centigrade), thereby creating the illusion that it’s warm enough to sit outside.  To feel the sun in November, even for a few moments, is delicious.

I’m calling this project ‘University Halls’ and it’s a throw for our eldest granddaughter who’s recently commenced studies at the University of Liverpool.  Those halls are cold and we are talking about British cold.  Thermometers there might not have to match the huge temperature range of Canada, but even above freezing, the damp cold gnaws at your very bones and the red brick and sandstone are especially good at holding on to that damp chill.

‘University Halls’ then, didn’t require a storyboard like Megan’s cowl.  It’s a simple design using a natural white, ‘thick-and-thin’ blend of alpaca and fine sheep, spun with ‘twizzles’ and ‘buns’.  The twizzles are formed by allowing the spinning yarn to twist back on itself.  The key to success is in taking it off of the bobbin very, very loosely.  I chose to keep these twizzles on one side of the work.  The ‘buns’ are the thick blobs of fibre that appear in thick and thin.  Sometimes they are mal-formed twizzles; other times they are just extra thick un-spun yarn.  The buns are tweaked and cajoled to remain on the other side of the work.  As an extra feature, I’ve randomly dropped and created stitches in the tricot, to produce a scalloped effect around the edge.  The finished item is quite knobby and raggedy and very random.  Hopefully, this is sufficient to remove the twee-ness that could otherwise make it look like Grandma actually made it.  We don’t want Natasha losing credibility with her new friends, do we?

The body of the throw has been worked in tricot to give a woven appearance and then edged with three rows of garter stitch.  The tricot was worked on a size 20 (5/8 inch) 22 inch long Mega hook and the garter was worked with size 50 or one inch diameter needles.  Here I’m using 32” long Mega knitting needles 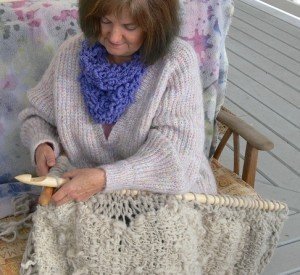 to hold the voluminous throw, whilst completing the edge work.

Tricot is the name I use for this type of crochet.  Some people call it Tunisian crochet, others call it Afghan stitch or Moroccan knitting.  Tricot has many names, but I suppose we all tend to stick to the name we heard when first learning the technique.  I was taught this when I was 17 years old, but it remained on a shelf in my memory for a lot of years, until I was reminded of it by a friend in England.

On a final note, the alpaca fibre is from Dante, a super champion stud from Tocino Alpaca Ranch and the sheep ….well, sadly, I don’t know her name; one of a large flock from the Falkland area of BC and I give her my silent heart-felt thanks.  This is a subject I would like to write about in more detail, but I do really like to know the origins of all the fibre that I use.