Dear Marjorie, should I be worried?

Dear Marjorie, should I be worried?

I intended to write about the Topless Hat which I crocheted from the first yarns spun by our students on the ancient and peculiar spinning wheels we have. Did you know that weavers used to pay a lot of money for newbie spinners yarns because they weren’t able to replicate those quirky yarns themselves – they should come to our creative spinning class!

The spinning lovelies took home the yarns they span on their spindles during the class, but it was too complicated to arrange this with the machined yarns – they had such fun going from one machine to another and spinning a bit of this and a bit of that!

I had planned these first attempts at machine spinning to be pooled from all the spinning workshops and worked up into a rug at the two day bootcamp planned for the summer, subsequently to be auctioned for our llama rescue sanctuary.

These first attempts at spinning though were so delicious (take careful note of that word!) I knew they would crochet into a wonderful, quirky hat … You will see a photo of the Topless Hat soon. How I wish that I had thought to snap a photo of Stephanie modeling it at the Mega Knitting class – she has one of those faces which are made for modelling hats!

When you see the photo, sans Stephanie, you will understand my question – or at least I hope you will, which will mean that I don’t have to be worried, because I am not the only one with this problem. As it sits without a model, it looks just like a delicious chocolate cake with creamed coconut icing trickling down the sides … 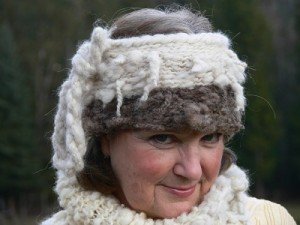 In fact here is the photo (unfortunately, not with the gorgeous Stephanie though)

Should I be worried? Perhaps not, but when I think of the items I have made very recently:
– Playground Duty Cowl, knitted for our daughter who is a teacher in chilly England from my tightly coiled and sprung yarn – impersonating a blueberry sponge ring
– Fluffy sunshine coloured batts which we will be using to hand paint on the carder at the upcoming dyeing workshop – looking very much like lemon meringue
And when I look over my recent Facebook posts the use of words such as chips, delicious, brewing …. I do wonder if Marjorie has any advice for me. I don’t overeat, but I am curious about this apparent obsession. Sound familiar anyone?