by DesignerLynne | May 1, 2013 | Dyeing Equipment, Dyeing Fibre, Techniques, Tools of the Trade | 0 comments

The process of dyeing fabric and fiber remained a mystery to me for many years and deliberately so.  I remember when I was just married (and I was VERY young when I married), buying one of those small aluminium containers of dye from the local shop, with the intention of transforming a couple of old bed sheets that had become grey from years of hand-washing, into beautiful pink sheets that looked just like those in the advert.  What a disaster!  The sheets looked like they had been tie-died and to add further insult, they bled their new blotchy colouring onto night clothes and mattress and continued to bleed dye for many months afterwards.  That single incident etched into my head the notion that do-it-yourself dyeing is a mugs game and must be avoided at all costs.

Well, a few decades later, having matured in body, mind and soul, I understand that dyeing doesn’t have to be like that.  Before I go any further, let me say that I am definitely not an expert on dyeing.  Yes, I have dyed a LOT of wool and animal fiber, but I don’t dye many other things …especially bed sheets!  If you want to learn more about fabric dyeing, then you’d best look for another source of information.  Natural fiber dyeing though, I might be able to help you 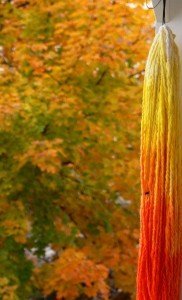 there or at least I can show you how I go about it.

Firstly, there are some basic principles that must be observed to ensure a successful and permanent colour uptake: heat and mordant.

I don’t remember exactly what steps I followed all those years ago, but with very limited space and resources and definitely no facility to bring a large pan of water, sufficient to contain two bed sheets, to a steady heat, I am not in the least surprised that it was such a failure.  Washing machines were luxury items then.  Crikey!  That makes me sound really old, but it is worth noting how quickly luxuries have apparently become necessities.

RIT is probably the name that forms on the lips of most people who have contemplated  dyeing an article of clothing.  RIT dye is widely available; you’ll find it on the shelves of most hardware and even grocery stores.  RIT used to be full of nasty substances, but these days the company claims to be more environmentally friendly.  Being a bit particular in that area, especially as the water will end up flowing into our septic tank and ultimately out into the soil, I would rather be absolutely sure of what I’m using. I do my best to keep inedible chemicals out of my living and growing space.

Lanaset produces a wide range of colours and also claim to be non-toxic.  However, we need to be clear about what non-toxic actually means.  If the instructions suggest that you need to wear a face mask, gloves and even goggles when handling the powdered dyes, then they are clearly, potentially injurious to your health and with the exception of food dyes, these precautions should be used when handling ANY powdered dye.

I have found Greener Shades offers a little more reassurance as to the low-toxicity of their dyes.   The down side of Greener Shades is the small quantities by which they are sold and consequently appear to be relatively pricey.   I have however, used them extensively, I like them and I feel more inclined to trust them. 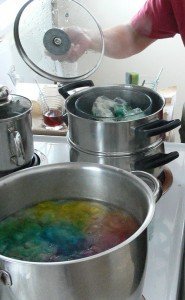 I also use food-grade dyes, which are not only bright, but supposedly edible.  I wouldn’t advise slugging back an entire bottle of blue cake dye though, but I have less cause for concern when using my cooking pots for both cooking and fiber-dyeing.  One of most popular food dyes is Kool-aid; you know, that powdered stuff that can be made into drinks?  I’m afraid you will never  catch me drinking it, but it does come neatly packaged with its own mordant and in a nice range of flavours and I’m quite happy to mix it up, paint it onto wool and flush the residue down the sink.

Words of such importance I shall say them again – heat and mordant.  Heat and mordant.  To fix the colour you need heat and a mordant.  Derived from the French ‘mordre,’ meaning ‘to bite,’ a mordant ‘bites’ into the fibre ensuring that the dye is well and truly fixed to it.  Mordants are usually acids and although commercially produced mordants are available, once again, I prefer to stick with the things I can trust, usually in the forms of citric acid and vinegar.

Citric acid can be found in most drug stores, chemists or whatever you like to call them, but if you have a bulk foods shop nearby, you might find it cheaper, without all the fancy packaging.  Any type of vinegar will work, but hold on to your fancy wine and apple cider 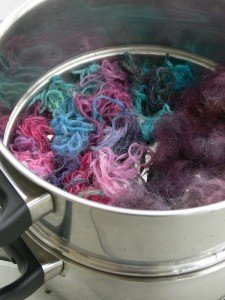 vinegars and pick up a container of pickling or cleaning vinegar.  Pickling vinegar contains around 7% acetic acid, whereas the regular white vinegar contains 5%.  The price is usually about the same, but since you will need to use less of the 7% vinegar, than the 5%, go for the pickling stuff.  Some shops also stock cleaning vinegar, which may be as high as 10% acetic acid.  Do your own comparisons, remembering that, the stronger the vinegar, the less you need.  We’ll talk about quantities in the next post.

Heat can be applied in a variety of ways, including complete immersion in hot water, simmered over a low heat, as well as steaming and microwaving.  The immersion method is great, because you can see when the dye in the bath has completely exhausted.

Stand a kitchen thermometer in the pan.  You want the temperature to remain between 120 and 160 degrees Fahrenheit.  If the water boils, the fiber can become too agitated, causing felting and if it’s too cool, the dye won’t hold.

Steaming works well, since the fiber is not immersed in water, it is less likely to felt.  The down side is that you cannot see the when the dye has exhausted. 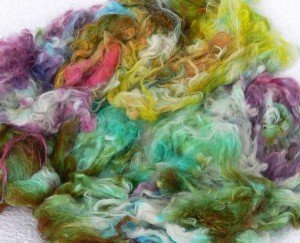 I detest microwave ovens and would never use one for heating food. However, it is a very quick, cheap and easy way to set the dye and I confess to making a concession to my rule of living in a ‘microwave-free home’ and actually invested in a microwave (it cost all of $3 from a thrift store).  The microwave lives a good distance from our living space and is only ever used outdoors.  A bit odd perhaps, but that’s who I am and proud of it.

In our next installment we will cover the basic steps of how to dye a skein of yarn.