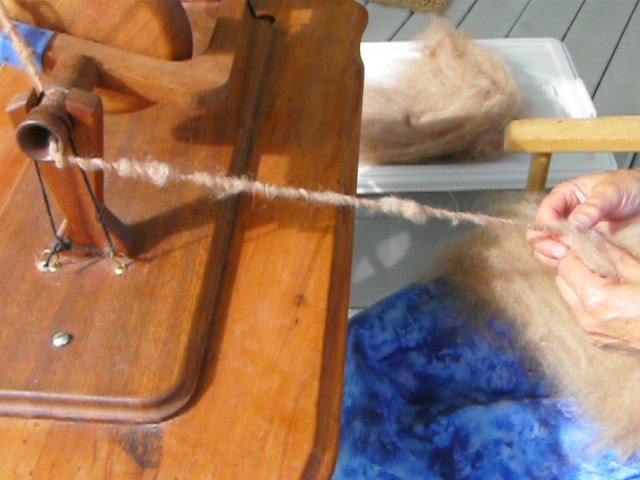 Occasionally, I really enjoy sitting at my little SpinWell spinning wheel and losing myself in the clack and whirr of the wheel.  This usually means that I’m spinning fine yarn.  My passion though, is the chunky stuff; art yarns: big fluffy ropes, lumpy, bumpy, thick-and-thins, like colourful strings of sausages.  Initially, I thought it was a kind of laziness, 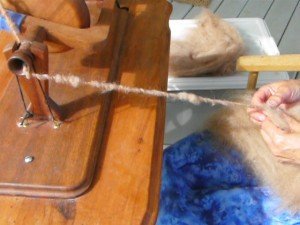 because I preferred to spend my time spinning, than carefully carding and cleaning the fibre, which is essential for the fine stuff.  However, I get a real kick out of spinning big yarns and having to spend less time on the preparation is just a little bonus.

Our current project is a double knitted rug, using 36 inch by size 35 mega knitting needles, which requires more than a few pounds of fibre and I’ve been experimenting with various ways of fattening up the yarn to produce the depth that I want.  (Tip: don’t try and knit with these super long needles near anything breakable, I’ve had several attempts at knocking over a cup of tea!)   I had an idea to crochet a rug by spinning a chunky two ply, Navaho ply it and then cable it, but right now I don’t have the time to spend in producing so much yarn.  That’s 12 strands of yarn!  For every 12 yards of yarn I spin, I end up with less than a single yard for crocheting.  I think that particular rug will have to be a winter project, but for now I needed something a teensy bit more productive and after trying out several ideas, I settled for the double knitted rug using a two ply, coreless core-spun yarn.

The fibre is a deliciously soft, pure huacaya llama in a soft pinky brown tone. This isn’t 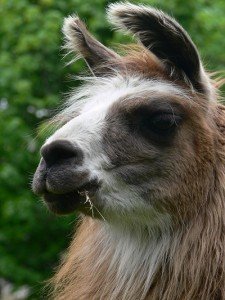 from one of our herd, but from the same herd as MoonCrystal, the paralyzed llama written about in a previous post.  ‘Moonie’ is doing amazingly well, by the way.  Yesterday, she stood up on three separate occasions, without any assistance.  Recovery is slow, but steady and a joy to behold.

Coreless core-spinning sounds like a contradiction in terms.  I don’t know who originally coined the term, but perhaps a more accurate description would be self-cored, core-spinning, since the control hand is instigating the spin, whilst the supply fibre is moved ahead of the control hand, feeding the fibre over the top of the freshly spun yarn.  However, this type of spinning technique has already been named coreless core-spinning, so that’s the term it will have to live with.

This spinning method does require a bit of practise, since the supply is doing two jobs and the hands find themselves with multiple tasks.  However, never be afraid of having a go; just because I’m showing you one particular system, I’m absolutely certain there are plenty of other variations that are awaiting discovery.  You learn nothing if you don’t experiment!  I know several different methods of making coreless core spun yarn and I play around until I

find one that suits both the project and the fibre that I’m using..  That’s one of the pleasures of sitting with other people whilst they spin.  We all do things slightly differently and just as a musicians get together and learn from each other’s individual techniques, so spinners can also make delightful ‘music’ when they get together.

Once more this is a more casual ‘sit in beside me and let’s spin’ session, rather than a ‘How To’ video tutorial. Enjoy it, comment on it or share your own derivation of coreless core spinning.  The double knitted rug will be a tutorial in its own right ….once I’ve finished making the yarn!

Did you know that you can convert your own treadle sewing machine into an heirloom spinning wheel?  CLICK HERE to download the detailed plans.