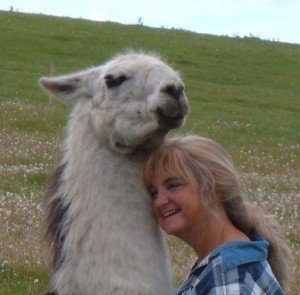 A Ragged Llama Joins Us

David used this photograph in a Power Point Presentation he created recently.  It was taken the day after we brought TomBurke home to live with us and I was shocked to be reminded what a bad state he was in.

Being a former racing llama, at nine years old, he was ‘retired’ and sold to someone as a guardian for the miniature bulls she was breeding.  TomBurke is a huge llama of the classic type (not heavily coated) as required by the racing standards.  Like most of us, I daresay his new keeper had heard that llamas are ‘vicious creatures who spit and bite and kick’ and being much smaller than he, she was rather afraid of him.  He cared for her miniature bulls for four years, without any supervision, living on a lakes edge and looking after himself.

When we were told about him, he had recently avoided being taken to the meat auction, having recognized the stock wagon for what it was and outwitted the rancher employed to capture and deliver him.  This rancher was also intimidated by llamas, even though he had two looking after his horses.  He told our dear friend, Gail, about this llama (known as Llama) telling her ‘if you can catch him, you can have him’.  She didn’t want a male.  She did, however, want access to a fantastic stud for her females and knew someone who would love to give him a home …..

This was no monster llama as we had been led to believe.  We have spoken to someone since who was there when he was being rounded up for the auction and claims to have seen him jump a seven foot fence.  We take this with a pinch of salt as the fences were badly in need of repair and in many places; I was able to step over them easily.  In fact, TomBurke more or less put his head in the lasso that Gail had taken in order to catch him.

When we collected him, he was still wearing the far too small halter that he had been wearing for at least the last four years.  The halter had worn itself into his jaw and he had a recurring abcess, which had probably been and gone many times, always being infected by the dirty halter rubbing away at his jaw.

We have tried many makes of llama halter and have not found one big enough for TomBurke.  Gail gave us a calf halter and this is still the only one which will safely fit him.

We brought TomBurke home on May 23rd 2005, the birthday of my beloved father who had been fascinated to learn of our interest in llamas and very keen to know them too, but who sadly, had very recently left this world.   Like Daddy, this llama was a true gentleman and we couldn’t think of anything more fitting than he should share his name as well as Daddy’s birthday – hence we named him TomBurke II, after my father. 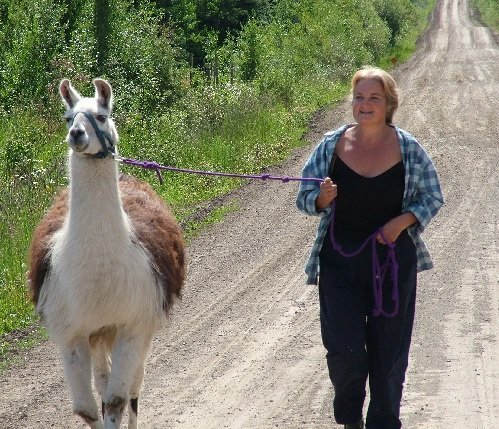 Seeing the photograph which Corrinne took two months later was a lovely reminder of how rapidly TomBurke improved.  In this photo, he and I are actually cantering (well he is – I was galloping as indicated by my shirt and camisole hanging off my shoulders!).  When I first took him for a walk to our upper property to show him his environment, he was very excited.   When he saw the long forest road stretching before him and felt the gravel road beneath his toes, he was instantly reminded of his racing days; he was eager to be off!   We really used to enjoy our runs together.

When he came to us, we were told that llamas live to be fifteen and we were pleased to give him a loving home for a couple of years!  In fact, we were thrilled to discover that a llama well cared for, will easily live for thirty years or more.  TomBurke will be twenty in May.  He is utterly Head of the Herd, still Gentleman Tom and we look forward to many more years enjoying his company.