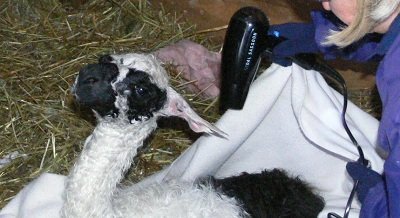 Ping seemed OK for a few days, but the same day as her frostbitten ears flopped, she started a disconcerting wheeze and chest rattle; she had lost weight too, down about 4 pounds from her 29lb birth weight. 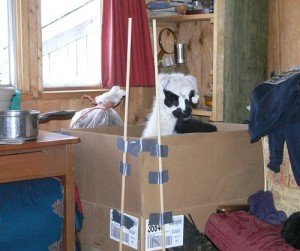 Hauled once more into the warm studio, Ping was provided with a large cardboard box, which she quickly decided was not suitable for living, but perfect for a toilet.

Llamas are incredibly easy to house-train, preferring to have one small area set aside for a toilet. As soon as she stepped through the little door made in the side of the box we could hold a bucket under her back end and catch all the produce.

The Oldest Remedy in the Book – Urine 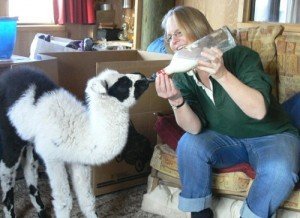 Friends were queuing up to feed Ping

At her first squatting, we swooped an old saucepan under her to catch the urine and added about 3cc of her urine to a bottle of milk. A 330cl beer bottle is the ideal vessel for milk feeding; plastic bottles collapse under the phenomenal sucking power of a cria! Lamb-feeding teats are readily available from feed stores and fit the beer bottles snuggly.

Getting a new-born llama to feed from a bottle is a trial of patience, but knowing that a baby animal usually needs darkness to start feeding, we invented a series of devices that pretended to be mummy! Sticking the bottle under an armpit with the teat barely showing started the ball rolling. Ping pushed her face into the warmth and darkness of David’s sweater and was ….. eventually, happy to feed.  Later, we contrived a feeding station in the form of a couple of sticks, taped to the corner of the cardboard box and used the sticks to support the sleeves of the sweater, with which Ping had become familiar.  With the sleeves pretending to be legs and the teat protruding slightly from between them, feeding usually commenced after only a minute of poking around.

Once Ping was used to the bottle feeding we only had to place a hand over her eyes and she would take a bottle.

Ping was urinating hourly and for the next six hours we would catch her urine and feed 2 or 3cc back into her bottle ready for the next feed. 2cc of ionic silver was also added to every other feed to support her weakened immune system.

In less than 24 hours the snuffling, croaking, rattling breath and distress of the pneumonia had vanished and Ping was back on her feet and full of llama bounce! 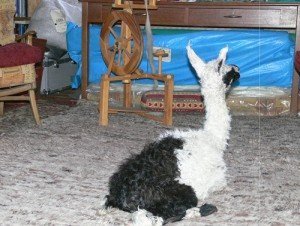 We decided to make up a bed on the floor of the studio and spent the next 10 days sharing the room with Ping, attending to toilet and feeding at 2 or 3 hour intervals throughout the night. Each day she was taken back out to SoDah for milk and bonding, but the bitterly cold weather continued, with temperatures in the region plummeting to -38 C. Ping spent most of her time indoors until she had regained her birth weight and was fighting fit. 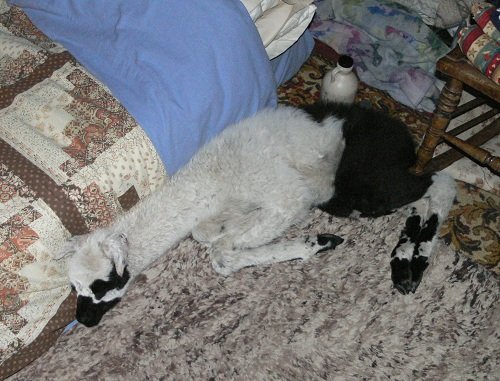 Ping snuggled up against our bed

Unfortunately, her ears didn’t fare as well as her lungs. The upper 4 inches of each ear was so badly frozen, they never recovered. The ears cracked and bled and our repeated attempts to create hats and ear-warmers were not welcomed by her or the rest of the herd! So desperate was Ping to rid herself of the many fluffy, fleecy or woolly contrivances that she made her ears crack and bleed even more. Honey and vitamin-E oil eased the pain a little, but she refused to wear a hat. For reference however, the most successful hat was made from the leg of a nylon stocking stretched over the head, holding a pad of SoDah’s fibre over each ear. Un-sexy and zero street-cred, but definitely warm! 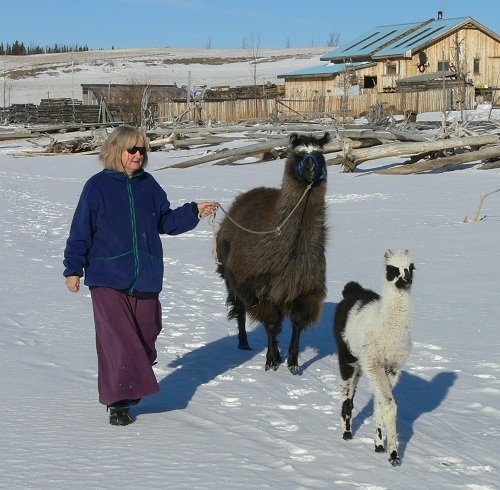 Sadly, Ping’s troubles were far from over.  If you wonder why we consider her to be  a miracle llama, wait for the next episode of ‘The Many Woes of Ping.’